Two “runners” are traveling around a track. They are running at different speeds. Eventually, they will get to opposite positions on the track. How do we get the slower runner to catch up?

This may sound like a story problem from a math class, but it was actually the basis for a storied problem involving magnetism and superconductivity that a team of researchers at Michigan State University led by Norman Birge, a professor in the Department of Physics and Astronomy in the MSU College of Natural Science, began to investigate several years ago.

The “runners” in the story problem above are the spin-up and spin-down electrons in ferromagnets. And the answer to the problem is found in the research team's paper, which appears in the July 27th issue of Science Advances, an open-access scientific journal published by the American Association for the Advancement of Science. 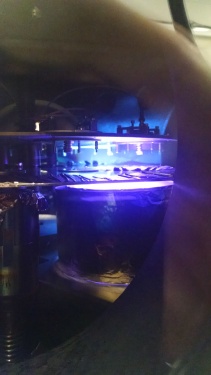 A sputtering ‘gun’ works by exciting a blue argon plasma above the target metal, and then accelerating positive argon ions into the target to knock off metal atoms, which travel to the sample located above.
Photo courtesy of Norman Birge.

“Historically, magnetism and super­con­ductivity were very dis­parate fields of physics,” Birge said. “The 1960s point of view was that if you were to bring a ferro­magnet near a super­con­ductor, you would kill the con­ductivity.”

Around 1980, Russian theorists realized that this was an over-simpli­fication. But it wasn't until about 2000 that this theoreti­cal work was demon­strated. Several Russian and French groups came up with schemes where these types of junctions could be useful.

“It was found that you can put a ferro­magnet near a super­con­ductor; in fact, you can even make a ‘sandwich’—super­con­ductor, ferro­magnet, super­con­ductor,” said Joseph Glick, a former Ph.D. student in Birge's lab (now working for IBM in York­town Heights, N.Y.) and the paper's lead author. “Any sand­wich of this type is called a Joseph­son junc­tion, which is at the heart of every­thing we are doing.”

Around 2001, scientists further predicted that you could get long-range super­currents through ferro­magnets by converting the super­conductor's spin-singlet electron pairs to spin-triplet pairs. Experi­mental papers were published between 2006 and 2010.

In 2010, the MSU researchers had a break­through. They were able to demon­strate this long-range super­current.

“We first saw this triplet supercurrent in 2010. At that point, I already knew that it should be possible to control the phase. That was a long-term goal of mine,” Birge said. “The trick was to place two extra ferromagnets at the ends, with non-collinear magnetizations; this created the spin-triplet, which could go through the middle magnet.”

That work was put aside for a while as the team investigated another research project focused on memory applications. Upon returning to the spin-triplet work, they had some new ideas about ways to better control the magnetism.

“So what's different about our current research, compared to our 2016 work on superconducting memory? The supercurrent in the new system is quite unusual, due to the way the electron spins are aligned,” Birge said.

It turns out that this spin-triplet breakthrough could have possible applications in the memory work, as well.

“With the spin-triplet,” Birge explained, “you can also make this controllable phase, although the mechanism is very different from the 2016 research.”

“We are measuring something called a SQUID—a superconducting quantum interference device—which is a very sensitive measurement of current, voltage & magnetic field,” he continued. “They are also used to detect very small magnetic fields coming from the human brain.”

The next step in the research is to look at ways to increase the supercurrent to make the Josephson junction devices more practical.

If you're wondering what the answer is to the story problem above: You get the slower “runner” to catch up by switching the direction of magnetization of one of the ferromagnets in the junction, so what was the North Pole is now the South Pole. As a result, the up-spin and down-spin electrons switch properties—the one that was faster now becomes slower, and vice versa.

A look inside the deposition system used to fabricate the multilayer Josephson junction structures. Each of the circular sputtering ‘guns’ holds a different kind of metal.
Photo courtesy of Norman Birge.