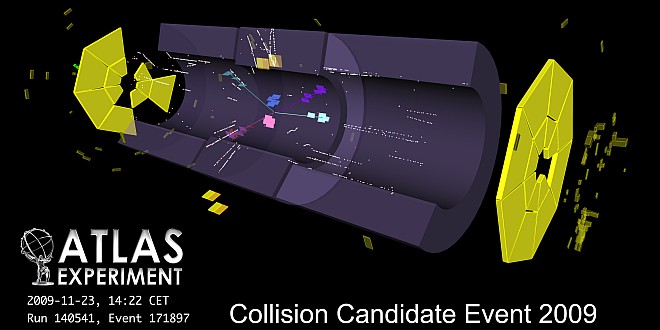 The long wait is over! Collisions were observed in the ATLAS detector at CERN's Large Hadron Collider (LHC) on Monday, November 23. A picture of the first collision is shown above. This event, along with almost all of the events taken by ATLAS so far, was triggered by the MBTS (Minimum Bias Trigger Scintillators), constructed at MSU and installed at CERN (the signals from the MBTS counters can be observed as the yellow quadrangles in the top left).

This marks the successful recovery of the LHC accelerator from the damage that occured in September of 2008 due to a faulty electrical splice between magnets. Commissioning will continue until the annual Christmas shutdown and then re-start in January. Through 2010, the intensity and energy will increase, culminating in a collision energy of 10 TeV (10 trillion electron-volts), or over five times the collision energy of Fermilab's proton-antiproton collider. Ultimately, the collision energy will rise to 14 TeV. 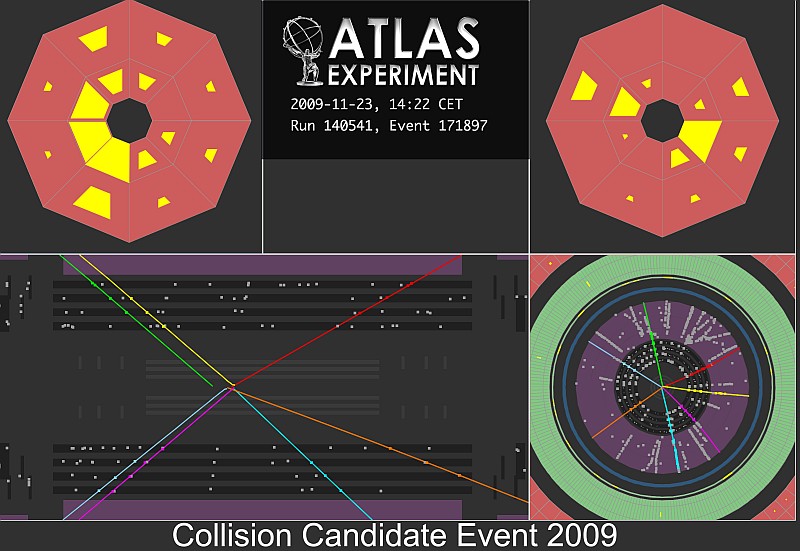 The high energy physics group at MSU has been a member of ATLAS since 1994, and has played a key role in the design, construction and installation of the ATLAS trigger and the ATLAS hadron calorimeter (Tilecal). (You may remember the north parking lot of the old Physics and Astronomy Building being blocked off approximately once a month for the shipment of the 32 10-ton Tilecal modules instrumented at MSU.)

Higher resolution copies of the above images may be found here and here.