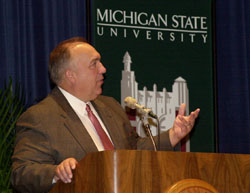 EAST LANSING, Mich. (AP) Michigan State University introduced its newly renovated, state-of-the-art cyclotron laboratory on Friday, a facility that will enable groundbreaking research in nuclear physics. After a $20 million, five-year renovation that connected and revamped two existing cyclotrons at Michigan State, researchers can now do in half a day experiments that used to take them a year, said Konrad Gelbke, director of the National Superconducting Cyclotron Laboratory. Our work is about discovery, about doing new things... and developing new technology to allow us to subject our ideas to rigorous scrutiny," Gelbke told about 400 people gathered to inaugurate the lab. 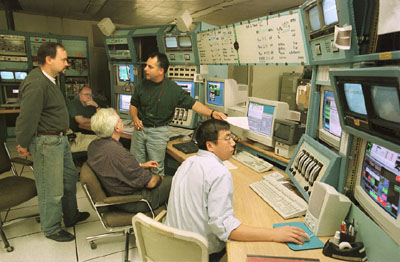 Gov. John Engler, who was among those attending the inauguration, said such research is critical to the state's economic growth. "To shortchange physical sciences is to shortchange our future," Engler said.

The National Science Foundation helped finance Michigan State's facility, which has 120 employees and 100 researchers, including 60 undergraduates. The facility even has its own machine shop, where it built all the parts for the new lab.

Only Germany and Japan have similar facilities which have not been upgraded to the extent Michigan State's has been, Gelbke said. Gelbke said Michigan State's cyclotron lab will be the premier facility of its kind for about five years, when Japan is expected to complete a $2 billion upgrade.

Michigan State's first cyclotron, used since 1982, and its second cyclotron, used since 1988, were combined and enhanced to form the new lab. The cyclotrons, which are circular structures controlled from a central computer bank, are connected by thousands of wires and pipes. The cyclotrons hurl atoms together at a rate of up to = 100,000 miles per second. The speed enables them to separate the nuclei from the atoms, which contain the rare isotopes that physicists want to study. Beams containing those isotopes are then sent through wires to various experimental stations, where scientists can examine their properties. The isotopes live for only a fraction of a second, making them impossible to study without such equipment. The experiments allow scientists to learn more about the origins of life, since the isotopes are the same as those created when a star dies and collapses in a brilliant flash.

"People are curious. People really want to understand what this world is about," Gelbke said. "How were the elements we're made from formed in the universe?"

Michigan State is now angling to be the site for the next generation cyclotron laboratory: An $800 million rare isotope accelerator funded by the U.S. Department of Energy. Michigan State is competing with the Argonne National Laboratory near Chicago for the project, which is expected to be completed in 2010. Engler won excited applause when he mentioned that project on Friday. "It seems to me all we need now is a rare isotope accelerator," Engler said. Engler reminded the audience that Energy Secretary Spencer Abraham is a Michigan State graduate.

The National Superconducting Cyclotron Laboratory at Michigan State University has completed its $20 million upgrade, funded by the National Science Foundation and MSU, and is now positioned to reopen as a national user facility which houses the world's highest energy continuous-wave accelerator.

The lab will mark the achievement with an inaugural celebration 1 p.m. Friday, July 27, at the Wharton Center. Gov. John Engler is expected to attend, as are several officials from the NSF and the U.S. Department of Energy.

For the public, the NSCL will host an open house and tours noon to 3 p.m. Sunday.

On June 2 - a month ahead of schedule - the MSU coupled cyclotrons delivered a beam of rare isotopes to an experimental station. The beam of Al33 - a rare isotope of aluminum packing six more neutrons than regular aluminum and weighing 22 percent more - heralded the success of the project. Al33 normally does not exist on earth since it lives only a fraction of a second. But for MSU researchers this is enough to explore its nature.

"If you want short-lived rare isotopes, we're the place to come," said Konrad Gelbke, director of the NSCL. "We finished our project ahead of schedule and within budget, which is a tremendous accomplishment in times when money is tight from the beginning. It's a sign of our excellent staff, faculty and students - and the superb project management by Richard York. Our facility is now world class - second to none."

The success comes after nearly five years of planning and work to modify and couple two existing superconducting cyclotrons to create an accelerator system that is a thousand-fold more powerful than the previous NSCL facility.

This will mean beams so powerful that MSU can get done in half a day what in the past would have taken a year. Gelbke said.

Cyclotrons hurl atomic nuclei against each other in order to unravel some of the basic truths of the universe: What we and that around us are made of, how the elements are formed, and how stars shine and evolve. Nuclear physicists use cyclotrons to recreate the cauldrons that exist inside stars and that result when stars die in gigantic explosions, called supernovae. It's in these cauldrons that short-lived rare isotopes become fleeting, essential ingredients to the recipe for concocting the elements.

Coupling the cyclotrons gives the scientists the ability to create more intense beams. More intensity means more atomic nuclei getting whirled around for collisions - and a quicker and more powerful gathering of data on the results of those collisions.

"If you need to do the tough experiments in this field, this is the place to come," said York, associate director for accelerators at the NSCL.

Scientific research, Gelbke explained, is exploration - with the promise of the rewards that come with discovery. Sometimes scientists find new elements. More often they create new isotopes, such as those used as "tracers" in medicine and other sciences. Sometimes they create practical tools, such as particle beams for cancer therapy, or countermeasures against terrorism.

"Not only is Michigan State home to the best rare isotope machine, but we're home to some of the brightest researchers in the world," Gelbke said. "We have created an outstanding intellectual environment here with students working side by side with leaders in their field. We've created a place where school children and their teachers can come and benefit from our work."

The MSU cyclotron is the world's first and the world's largest superconducting cyclotron. Its 40-year history of nuclear science and accelerator physics makes it a logical launch pad for the next generation of nuclear physics.

"We're perfectly positioned for the next priority of nuclear physics - the Rare Isotope Accelerator," Gelbke said. "That's what's so exciting about this. While we have extraordinary opportunities for discovery at the present, we are already laying the foundation for research pursued in the future by the next generation of scientist now trained at our universities."