Feb. 1, 2007: We are pleased that one of our Adjunct Professors of Physics, Prof. Albert Fert of CNRS/Thales and the University of Paris Sud, in Orsay, France, was just awarded the 2007 Wolf Prize and the 2007 Japan Prize, both jointly with Peter Grünberg of the KFA Jülich, Germany.

The two independently discovered the Giant Magnetoresistance Effect in Magnetic Multilayers, which has had important technological applications in devices such as read-heads for hard disc drives, and also spawned the new field of Spintronics: electronics in which the spins (magnetic moments) of electrons play an important role supplementary to their charges. Professor Fert has collaborated, for over a decade, with our Professors Bass, Pratt, and Schroeder.

UPDATE 09 OCTOBER 2007: Professor Fert shares the 2007 Nobel Prize in Physics with Peter Grünberg for these achievements. 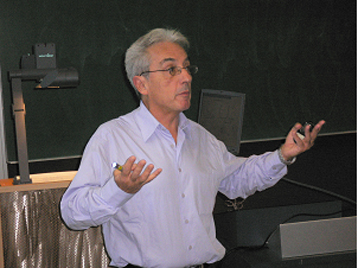