A team of scientists, led by University Distinguished Professor Timothy C. Beers, have used data from the Sloan Digital Sky Survey to demonstrate that the halo surrounding the Milky Way comprises two stellar components rotating in opposite directions about the center of the Galaxy. 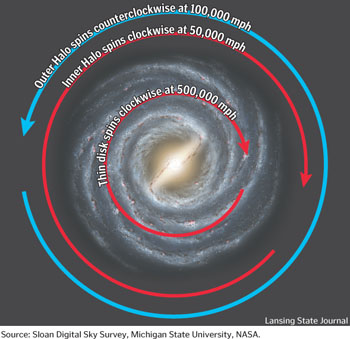 While the inner part of the halo rotates in the same direction as the disk of the Galaxy, the outer part appears to rotate "backwards." The halo components also differ in their chemical makeup and orbital characteristics, prompting the team to conclude that the two components were likely formed in different ways and perhaps at different times in the history of the Galaxy.

"Although it was once considered a single component, an analysis of more than 20,000 stars from the Sloan Digital Sky Survey (SDSS-II) has shown that the halo is clearly divisible into two, broadly-overlapping structural components,? Beers explained. "This discovery is important because it provides critical information on the formation of the first objects in the Universe and in our own galaxy."

The stellar material in the inner halo was likely to have formed first, from numerous massive sub-Galactic structures that collided in the same direction as presently observed Galactic rotation. The outer halo is likely to have formed somewhat later, from the mergers of many smaller sub-Galactic structures many billions of years ago. The researchers believe that the merged galaxies came in opposite the Galaxy's rotation and - as more galaxies were acquired - they "remembered" their orbits and stayed in place in opposition to the clockwise galactic rotation.

The two structures also vary dramatically in their chemical properties. "Based on our analysis, we find that the outer-halo stars are three times more metal poor than the inner-halo stars," according to Beers. "Metal poor" (or low metallicity) refers to the relative abundances of elements heavier than helium; elements that are created during the lives and deaths of stars. The earliest generations of stars have the lowest metallicities, since they formed from gas that had little previous processing.

Thus, the new discovery will help astronomers refine future searches for these "jewels of the night sky", the stars that have recorded the elemental abundances created only a few hundred million years after the Big Bang, using MSU's access to the SOAR 4.1 m telescope, and other telescopes.