The High Altitude Water Cherenkov Observatory (HAWC) has been in operation for just over a year, collecting detailed observations of approximately two-thirds of the sky at high energy gamma-ray wavelengths with about 15 times the sensitivity of previous gamma-ray survey instruments.

At the April meeting of the American Physical Society, the research team behind HAWC, including MSU Physics & Astronomy professors James Linnemann, Kirsten Tollefson, and Tyce DeYoung, released the deepest survey map to date of the highest energy gamma-ray sources in the northern sky. It shows a clear picture of gamma-ray emitting objects including pulsars, active galaxy cores and many objects in the plane of our Milky Way galaxy which need further study to characterize, some of which had gone undetected by earlier searches. HAWC images of many sources are at higher resolutions than have been possible before and some show details of internal structure, which will help determine the dynamics of ultra-high energy particles in locations such as pulsar wind nebulae and supernova remnants. 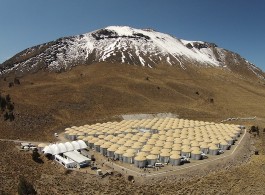 The HAWC Gamma-ray Observatory site, in the mountains near Orizaba, Mexico.

Located 13500 feet (4100 m) above sea level in the state of Puebla in Mexico, HAWC is the newest tool available to visualize these explosive events and learn more about the nature of high-energy radiation, possessing approximately 15 times the sensitivity of previous gamma-ray survey instruments. Completed in March 2015, Michigan State University has played a key role in HAWC from its beginning, led by the Physics & Astronomy faculty members mentioned earlier, but also including post-doctoral research associates, graduate students, and undergraduate students, who helped to design and build the detector and who are developing many of the key systems which collect and analyze the data from HAWC's detectors and monitor its operations.

Professor Jim Linnemann was the HAWC electronics coordinator during the construction phase and states that “HAWC is starting to see new sources of very high-energy gamma-ray showers that have never been detected before. HAWC partners with other observatories to study such new sources, and shares information on possible new sources even before the official scientific publication of HAWC results, allowing collaborative studies for maximum scientific impact. The HAWC Observatory is showing that it is a much better ‘eye on the sky’ than the predecessor Milagro experiment; HAWC can resolve details which were impossible for Milagro.”

Associate Professor Kirsten Tollefson serves as Deputy Manager of the detector and says that the new sky map shows that HAWC is working well. “HAWC is excited to study these new sources, but the MSU group is using this data to put constraints on dark matter models and searching for evaporating primordial black holes.”

Tollefson added that HAWC is also looking for sources whose brightness is variable: “Just last week, we notified the astronomy community about an increase in brightness of one of the active galaxies seen in our sky map. Studying its time variability allows us to better understand the mechanism by which the black hole at its center accelerates particles to extremely high energies.”

The HAWC team is an international collaboration of approximately 120 scientists from 25 universities and national laboratories. HAWC was built with the support of the National Science Foundation, the U.S. Department of Energy, and El Consejo Nacional de Ciencia y Tecnología in Mexico.

The sky map released by the HAWC Observatory research team based on its first year's observations, showing intensities of high-energy gamma-rays coming from the plane of the Milky Way galaxy, active galaxies such as Markarian 421, and pulsars such as in the Crab Nebula and Geminga. Select this for a higher resolution image.

For more information, see the MSU Today article or the MSU College of Natural Science article, or download the PDF files of the MSU HAWC group press release or the press release by the HAWC team at the APS Meeting.