Researchers from Michigan State University and the RIKEN Nishina Center in Japan have discovered eight new rare isotopes of the elements phosphorus, sulfur, chlorine, argon, potassium, scandium and, most importantly, calcium. These are the heaviest isotopes of these elements ever found.

Isotopes are different forms of elements found in nature. Isotopes of each element contain the same number of protons, but a different number of neutrons. The more neutrons that are added to an element, the heavier it is. The heaviest isotope of an element represents the limit of how many neutrons the nucleus can hold. 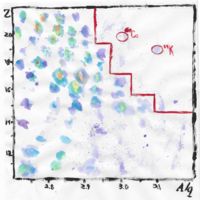 Isotopes of the same element have different physical properties. “Stable” isotopes live forever, while some isotopes might only live for a few seconds or less. The most extreme ones, such as the heaviest, might exist bare fractions of a second before disintegrating.

The most interesting short-lived isotopes synthesized during a recent experiment at RIKEN's Radioactive Isotope Beam Factory were calcium-59 and calcium-60, which are now the most neutron-laden calcium isotopes known to science.

The nucleus of calcium-60 has 20 protons and twice as many neutrons. That's 12 more neutrons than the heaviest of the stable calcium isotopes, calcium-48. This stable isotope disintegrates after living for hundreds of quintillion years, or 40 trillion times the age of the universe. In contrast, calcium-60 lives for a few thousandths of a second.

Proving the existence of a certain isotope of an element can advance scientists' understanding of the nuclear force—a longstanding quest in nuclear science.

“At the heart of an atom, protons and neutrons are held together by the nuclear force, forming the atomic nucleus,” said Oleg Tarasov, a staff physicist at MSU's National Superconducting Cyclotron Laboratory (NSCL). “Scientists continue to research what combinations of protons and neutrons can exist in nature even if it is only for fleeting fractions of a second.”

Alexandra Gade, Professor of Physics & Astronomy at MSU and NSCL chief scientist, is interested in the comparison of the new discoveries to nuclear models. In a way, these models paint a picture of the nucleus at different resolutions.

“Some of these models that describe nuclei at the highest resolution scale predict that 20 protons and 40 neutrons will not hold together to form Ca-60,” Gade said. “The discovery of calcium-60 will prompt theorists to identify missing ingredients in their models.” 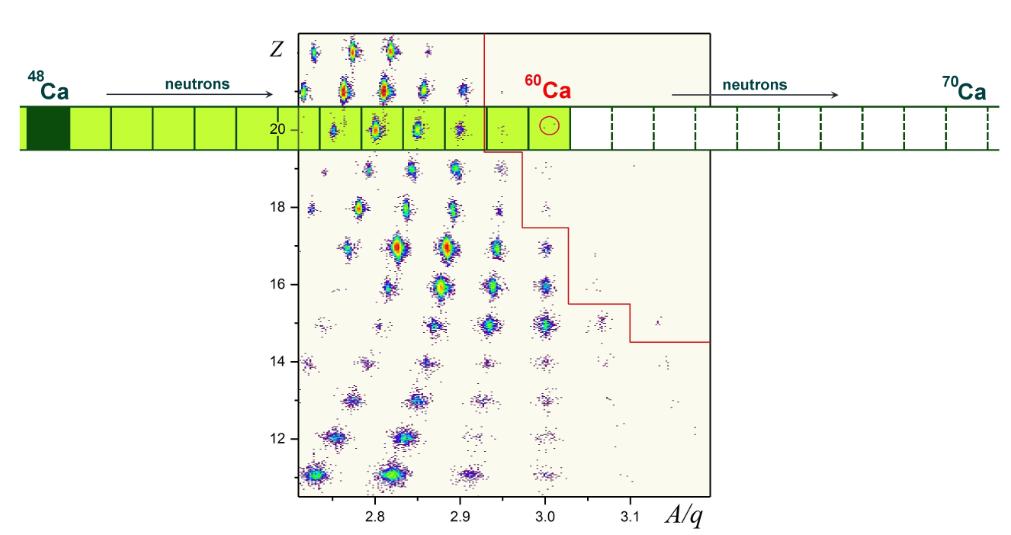 Researchers from MSU and the RIKEN Nishina Center in Japan have discovered eight new rare isotopes, including the heaviest known calcium atom, calcium-60. The illustration shows a plot used to identify the different nuclei produced in the measurement. Z is the number of protons and A/q is the ratio of the number of protons and neutrons over the charge. The calcium isotopes are indicated from the last stable calcium-48 out to calcium isotopes that can only be reached with FRIB. All nuclei to the right of the red line have been observed for the first time in this measurement.
Credit: National Superconducting Cyclotron Laboratory

Two of the other new isotopes of sulfur and chlorine, sulfur-49 and chlorine-52, were not predicted to exist by a number of models that paint a lower resolution picture of nuclei. Their ingredients can now be refined as well.

Creating and identifying rare isotopes is the nuclear physics version of a formidable needle-in-a-haystack problem. To synthesize these new isotopes, researchers accelerated an intense beam of heavy zinc particles onto a block of beryllium. In the resulting debris of the collision, with a minuscule chance, a rare isotope such as calcium-60 is formed. The intense zinc beam that enabled the discovery of calcium-59 and calcium-60 was provided by the RIBF, which is presently home to the world's most powerful accelerator facility in the field. The isotopes calcium-57 and calcium-58 were discovered in 2009 at NSCL.

In the future, MSU's Facility for Rare Isotope Beams will allow scientists to potentially make calcium-68 or even calcium-70, which may be the heaviest possible calcium isotopes.

This research was supported by the National Science Foundation and MSU. In the publication describing the team’s findings, the July 11th edition of Physical Review Letters, it was selected as an Editors' Suggestion.

The National Science Foundation's National Superconducting Cyclotron Laboratory is a center for nuclear and accelerator science research and education. It is the nation's premier scientific user facility dedicated to the production and study of rare isotopes.