An international team of scientists, including Michigan State University physicist Tyce DeYoung, has found the first evidence of a source of high-energy cosmic neutrinos, ghostly subatomic particles that can travel unhindered for billions of light years from the most extreme environments in the universe to Earth.

The observations, made by the IceCube Neutrino Observatory at the Amundsen-Scott South Pole Station and confirmed by telescopes around the globe and in Earth's orbit, help resolve a more than a century-old riddle about what sends subatomic particles such as neutrinos and cosmic rays speeding through the universe.

Since they were first detected more than 100 years ago, cosmic rays—highly energetic particles that continuously rain down on Earth from space—have posed an enduring mystery: What creates and launches these particles across such vast distances? Where do they come from?

Because cosmic rays are charged particles, their paths cannot be traced directly back to their sources due to the powerful magnetic fields that fill space and warp their trajectories. But the powerful cosmic accelerators that produce them will also produce neutrinos. Neutrinos are uncharged particles, unaffected by even the most powerful magnetic field. Because they rarely interact with matter and have almost no mass—hence their sobriquet “ghost particles”—neutrinos travel nearly undisturbed from their accelerators, giving scientists an almost direct pointer to their source.

Two papers published this week in the journal Science have for the first time provided evidence for a known blazar as a source of high-energy neutrinos detected by the National Science Foundation-supported IceCube observatory. This blazar, designated by astronomers as TXS 0506+056, was first singled out following a neutrino alert sent by IceCube on 22 September 2017.

“The evidence for the observation of the first known source of high-energy neutrinos and cosmic rays is compelling,” said Francis Halzen, a University of Wisconsin-Madison professor of physics and the lead scientist for the IceCube Neutrino Observatory.

“The era of multimessenger astrophysics is here,” said NSF Director France Córdova. “Each messenger—from electromagnetic radiation, gravitational waves and now neutrinos—gives us a more complete understanding of the universe and important new insights into the most powerful objects and events in the sky. Such breakthroughs are only possible through a long-term commitment to fundamental research and investment in superb research facilities.” 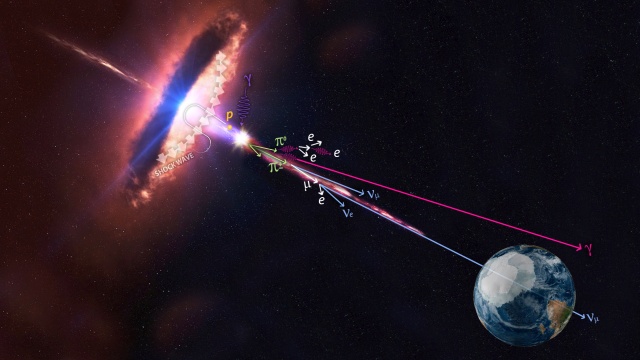 In this artistic rendering, a blazar is accelerating protons that produce pions, which produce neutrinos and gamma rays. Neutrinos are always the result of a hadronic reaction such as the one displayed above. Gamma rays can be produced in both hadronic and electromagnetic interactions.
Image Credit: IceCube/NASA.

A blazar is a giant elliptical galaxy with a massive, rapidly spinning black hole at its core. A signature feature of blazars is that twin jets of light and elementary particles, one of which is pointing to Earth, are emitted from the poles along the axis of the black hole's rotation. This blazar is situated in the night sky just off the left shoulder of the constellation Orion and is about 4 billion light years from Earth.

Equipped with a nearly real-time alert system—triggered when a very high-energy neutrino collides with an atomic nucleus in the Antarctic ice in or near the IceCube detector—the observatory broadcast coordinates of the September 22nd neutrino alert to telescopes worldwide for follow-up observations.

NASA’s orbiting Fermi Gamma-ray Space Telescope was the first telescope to identify enhanced gamma-ray activity from TXS 0506+056 within 0.06 degrees of the IceCube neutrino direction. In a decade of Fermi observations of this source, this was the strongest flare in gamma rays, the highest-energy photons. A later follow-up by the Major Atmospheric Gamma Imaging Cherenkov Telescope (“MAGIC”), in the Canary Islands, detected gamma rays of even higher energies.

These observations prove that TXS 0506+056 is one of the most luminous sources in the known universe and, thus, add support to a multimessenger observation of a cosmic engine powerful enough to accelerate high-energy cosmic rays and produce the associated neutrinos. Only one of these neutrinos, out of many millions that sailed through Antarctica's ice, was detected by IceCube on September 22nd.

Bolstering these observations are coincident measurements from other instruments, including optical, radio and X-ray telescopes.

“The ability to globally marshal telescopes to make a discovery using a variety of wavelengths in cooperation with a neutrino detector like IceCube marks a milestone in what scientists call ‘multimessenger astronomy,’” Halzen said.

“These intriguing results also represent the remarkable culmination of thousands of human years of intensive activities by the IceCube Collaboration to bring the dream of neutrino astronomy to reality,” said Darren Grant, a professor of physics at the University of Alberta and the spokesperson of the IceCube Collaboration, an international team with more than 300 scientists in 12 countries.

Austrian physicist Victor Hess proved in 1912 that the ionizing particles scientists were detecting in the atmosphere were coming from space. Cosmic rays are the highest energy particles ever observed, with energies up to a hundred million times the energies of particles in the Large Hadron Collider at CERN in Switzerland, the most powerful human-made particle accelerator. These extremely high energy cosmic rays can only be created outside our galaxy and their sources have remained a mystery until now. Scientists had speculated that the most violent objects in the cosmos, things like supernova remnants, colliding galaxies, and the energetic black hole cores of galaxies known as active galactic nuclei, such as blazars, could be the sources.

As the latest astrophysical messenger to enter the game, neutrinos bring crucial new information to uncovering the inner workings of these cosmic ray accelerators. In particular, measurements of neutrinos can reveal the mechanisms for particle acceleration of the proton beam in the densest environments that even high-energy gamma rays may not escape. 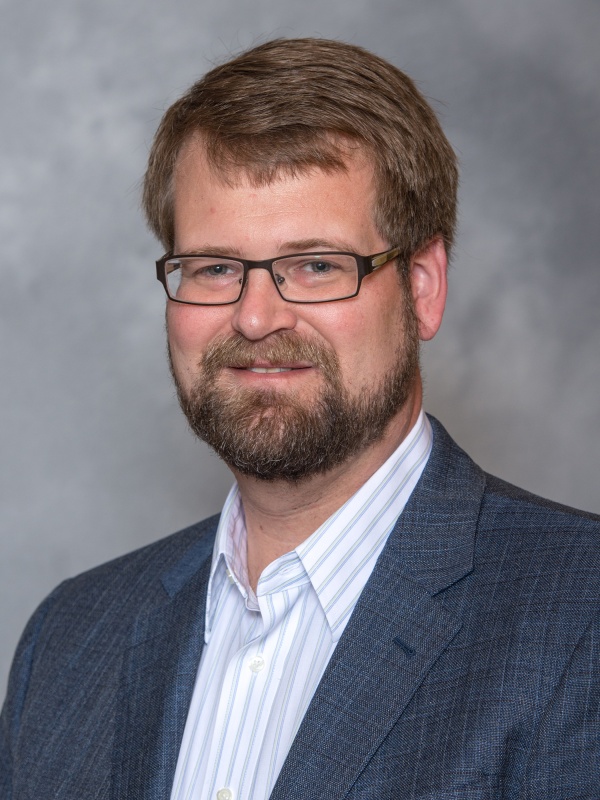 Tyce DeYoung is an Associate Professor of Physics & Astronomy at MSU. He is part of an international team of researchers that is studying neutrinos, fundamental particles that are produced by stellar events such as supernovas.
Photo courtesy of the MSU College of Natural Science.

“Neutrino astronomy offers us a very different view of the universe than we get from other types of telescopes,” said Tyce DeYoung, Associate Professor of Physics & Astronomy at Michigan State University and member of the IceCube collaboration. “Neutrinos can bring us information about the highest energy particles deep inside these accelerators, even if gamma rays or optical light are absorbed before they escape. They tell us what's happening deep inside of the source, like a medical X-ray showing us what's inside the human body.”

Following the September 22nd detection, the IceCube team quickly scoured the detector's archival data and discovered a flare of more than a dozen astrophysical neutrinos detected in late 2014 and early 2015, coincident with the same blazar, TXS 0506+056. This independent observation greatly strengthens the initial detection of a single high-energy neutrino and adds to a growing body of data that indicates TXS 0506+056 is the first known accelerator of the highest energy neutrinos and cosmic rays.

Detecting the highest energy neutrinos requires a massive particle detector, and IceCube is by volume the world's largest. Encompassing a cubic kilometer of deep, pristine ice a mile beneath the surface at the South Pole, the detector is composed of more than 5,000 light sensors arranged in a grid. When a neutrino interacts with the nucleus of an atom, it creates a secondary charged particle, which, in turn, produces a characteristic cone of blue light that is detected by IceCube and mapped through the detector's grid of photomultiplier tubes. Because the charged particle and light it creates stay essentially true to the neutrino’s direction, they give scientists a path to follow back to the source. 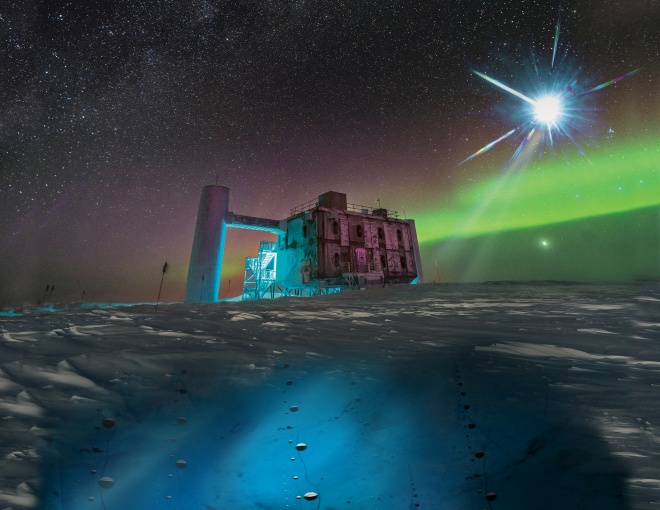 In this artistic rendering, based on a real image of the IceCube Lab at the South Pole, a distant source emits neutrinos that are detected below the ice by IceCube sensors, called DOMs.
Image Credit: IceCube/NSF.

IceCube continuously monitors the sky, including through the Earth to the northern hemisphere, and detects a neutrino every few minutes. Most of the neutrinos it detects, however, are low energy, created by more common phenomena, such as the showers of subatomic particles stemming from cosmic ray particles crashing into atomic nuclei in the Earth's atmosphere.

Particles of particular interest to the IceCube team pack a more energetic punch. The neutrino that alerted telescopes around the world had an energy of approximately 300 TeV. (The energy of the protons circulating in the 26.7-kilometer ring of the Large Hadron Collider is 6.5 TeV.)