Is there an end to the periodic table?

As the 150th anniversary of the formulation of the Periodic Table of Chemical Elements looms, a Michigan State University professor probes the table's limits in a recent Nature Physics Perspective.

Next year will mark the 150th anniversary of the formulation of the periodic table developed by Dmitry Mendeleev. Accordingly, the United Nations proclaimed 2019 as the International Year of the Periodic Table of Chemical Elements. At 150 years old, the table is still growing. In 2016, four new elements were added: nihonium, moscovium, tennessine and oganesson. Their atomic numbers—the number of protons in the nucleus that determines their chemical properties and place in the periodic table—are 113, 115, 117 and 118, respectively. 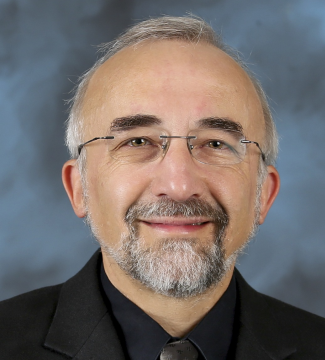 It took a decade and worldwide effort to confirm these last four elements. And now scientists wonder: how far can this table go? Some answers can be found in a recent Nature Physics Perspective by Witek Nazarewicz, Hannah Distinguished Professor of Physics & Astronomy at MSU and chief scientist at the Facility for Rare Isotope Beams.

All elements with more than 104 protons are labeled as “superheavy,” and are part of a vast, totally unknown land that scientists are trying to uncover. It is predicted that atoms with up to 172 protons can physically form a nucleus that is bound together by the nuclear force. That force is what prevents its disintegration, but only for a few fractions of a second.

These lab-made nuclei are unstable and spontaneously decay soon after they are formed. For the ones heavier than oganesson, this might be so quick that it prevents them from having enough time to attract and capture an electron to form an atom. They will spend their entire lifetime as congregations of protons and neutrons.

If that is the case, this would challenge the way scientists today define and understand atoms. They can no longer be described as a central nucleus with electrons orbiting it much like planets orbit the sun.

And as to whether these nuclei can form at all, it is still a mystery.

Scientists are slowly but surely crawling into that region, synthesizing element by element, not knowing what they will look like, or where the end is going to be. The search for element 119 continues at several labs, mainly at the Joint Institute for Nuclear Research in Russia, at the GSI Helmholtz Centre for Heavy Ion Research in Germany and RIKEN in Japan.

“Nuclear theory lacks the ability to reliably predict the optimal conditions needed to synthesize them, so you have to make guesses and run fusion experiments until you find something. In this way, you could run for years,” said Nazarewicz.

Although the new Facility for Rare Isotope Beams at MSU is not going to produce these superheavy systems, at least within its current design, it might shed light on what reactions could be used, pushing the boundaries of current experimental methods. If element 119 is confirmed, it will add an eighth period to the periodic table.

This bounds-pushing was captured by the Elemental Haiku by Mary Soon Lee for element 119:

Will the curtain rise?
Will you open the eighth act?
Claim the center stage?

The discovery might not be too far off. Soon could be now or in two to three years, Nazarewicz said. 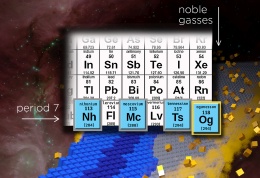 A graphical representation of the current end of the periodic table, with the most recent four elements to be discovered highlighted in light blue.
(Illustration by Erin O'Donnell, National Superconducting Cyclotron Laboratory; and Andy Sproles, Oak Ridge National Laboratory.)

Another exciting question remains. Can superheavy nuclei be produced in space? It is thought that these can be made in neutron star mergers, stellar collisions so powerful that they literally shake the very fabric of the universe. In stellar environments like this where neutrons are abundant, a nucleus can fuse with more and more neutrons to form a heavier isotope. It would have the same proton number and therefore is the same element but heavier. The challenge here is that heavy nuclei are so unstable that they break down long before adding more neutrons and forming these superheavy nuclei. This hinders their production in stars. The hope is that through advanced simulations, scientists will be able to “see” these elusive nuclei through the observed patterns of the synthesized elements.

As experimental capabilities progress, scientists will pursue these heavier elements to add to the remodeled table. In the meantime, they can only wonder what fascinating applications these exotic systems will have.

“We don’t know what they look like, and that's the challenge,” Nazarewicz said. “But what we have learned so far could possibly mean the end of the periodic table as we know it.”