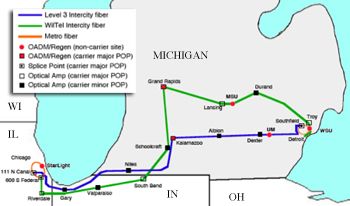 EAST LANSING, Mich. - That giant is 750 miles of fiber optic cable that lassoes its three biggest research universities and Van Andel Institute to the future. Its first mission: To uncover the nature of the Big Bang by connecting U.S. physicists to their huge experiment ATLAS in Geneva, Switzerland, at the European Centre for Nuclear Research, or "CERN." The University of Michigan and Michigan State University together are creating one of the portals to these secrets for hundreds of U.S. physicists.

Why squirt data at Chicago and why at such high rates of speed?

MSU physics professor Raymond Brock, co-director of the AGL-Tier 2 center explains: "You see, when it comes to understanding the fundamental constituents that make up the universe, it's often instructive to look in as well as up for answers. The insides of each proton literally carry the secrets of how the whole universe began. But, revealing those clues means taking the proton apart, and the only way to do that is to bang them together at enormous energies created by large particle accelerators."

The newest of these is deep underground, beneath the French-Swiss Jura Mountain range in a magnetic race track 17 miles in circumference called the Large Hadron Collider (LHC). Under construction since the 1980s, it is poised to come on line in May of 2008 involving hundreds of physicists from the United States, including 30 from MSU and U-M.

"But," Brock continued, "Einstein's T-shirt E=mc2 formula tells us that 'lots of energy' results in lots of elementary particles - some of the normal kind (electrons, protons, neutrons) and thousands of more exotic sorts." Each one is important and each one leaves detailed information as it traverses the ATLAS detector. But, thousands of particles are produced 100,000,000 times per second. That's lots of data, more than any laboratory can analyze, more than any country can analyze. So, the world will analyze it, by divvying it up.

ATLAS is a massive detector housed at CERN, soon to become the world's largest particle physics laboratory. ATLAS is designed to collect and measure the subatomic debris resulting from the collision of counter-circulating high-energy proton beams. Since "lots of energy" means very hot conditions - the hotter, the better - as the conditions begin to resemble the hottest condition of all: The Big Bang. So, each collision offers researchers a glimpse into the fundamental particles present during the dawn of our universe.

Analyzing the end products of these collisions often leads scientists to the discovery of both unknown particles and a deeper understanding of how these and other entities are produced and interact with one another.

"We expect to see new particles as a result of the ATLAS experiments," Brock said, "but, ultimately this is all about what happened in the first of the universe. Every time there's a proton-proton collision in such an accelerator as CERN or Fermilab we're going back and sampling the conditions which occurred at about a pico-second after the birth of the universe"

"The Michigan Lambda Rail is the next step," said John King, professor in the School of Information and vice provost for academic information at U-M. "What we're doing is talking about quantities of information that dwarf the normal capabilities. At the moment most people don't have a need to move this much data this fast," but that too will eventually change, and MiLR will help them too.

In 2006, MSU and U-M high energy physics groups partnered together and proposed to become the ATLAS Great Lakes Tier 2 Computing Center. They were approved and together, the two Michigan universities will be major players in the second level of data simulation and analysis making it available to the hundreds of participating scientists from around the United States. Together, they are building a unified computing center on both campuses which will house some 25,000 PC-equivalent processors and a PetaByte of storage - equivalent to a mile-high stack of CDs. Only five universities and U.S. laboratories are designated as Tier 2 ATLAS Computing Centers in the United States.

Again, why Chicago? That's where major high-speed backbones connect like a tree trunk to dozens of "branch" institutions in the United States and where the stepping-off point originates to CERN and the rest of the high-tech "grid" world.

Physicists expect that their research at ATLAS will take them far beyond what the well-tested theories of their field tell them - because these theories contain a ticking time bomb, set to go off at ATLAS.

Forty years ago, physicist Steve Weinberg wrote down the equations that formed the basis of the "Standard Model" detailing how fundamental particles form and interact. For decades this theory withstood experimental attack. But all along, physicists have known Weinberg's Standard Model - even though astonishingly accurate - isn't completely solid.

Brock explained: "The Standard Model is only capable of predicting how particles will interact up to a certain energy level. As tests go above this energy threshold, the model begins to mathematically break down."

Now, that's all about to change. ATLAS will allow scientists to reach beyond that energy threshold and venture into new territory where the results will yield even more new entities and presumably an evolved model for fundamental particle interactions.

This notion is one that hopeful high-energy physicists from around the world have held for years.

"Most of us have been working since graduate school to get to precisely this point," Brock said.

In the foreseeable future every automobile will connect to a network that feeds it information about safety, directions, etc. It will take huge amounts of bandwidth to move that information. In another example, consider that in as little as 20 years, all written human knowledge may be online, U-M's King said. Eventually, this kind of network capacity will enable students in high school physics classes to actually participate in global experiments, rather than just learning about them from a textbook.

"What's exciting is Michigan is one of the few places in the country that is doing this in its own backyard," he said. "It's being there at the beginning, that's the key thing. We have the opportunity to find out first, how it works, what doesn't work, what difference it makes and how to exploit it."

"Use of the Michigan Lambda Rail for research and educational purposes in general facilitates bringing high-end research into Michigan - for example the AGL-Tier 2 center -- which is known to have a large multiplier in terms of total economic benefit," said David Gift, vice provost, libraries, computing and technology at MSU.

The Michigan Lambda Rail can be used by commercial firms with which the research universities have collaborative research and development programs. Use of the high-speed cable to interconnect with other states' education and research networks facilitates interstate/interinstitutional opportunities that lets Michigan and its residents take advantage of opportunities that are arising in those other states, and could help us to leverage the relatively faster economic recovery that is occurring in surrounding states in the upper Midwest region, Gift said.

The high energy physics groups at MSU and U-M have a long history of working together to study complex scientific questions. But never before have the two groups formally banded together to participate in such a high-level physics research project.

"The fire hose of data that will come out of the ATLAS experiment will be more than any single institution or even national laboratory can analyze," Brock said.

The computing model for ATLAS is tiered, involving both national labs and universities from around the world.

"We are pooling the resources of our two universities and making the one powerful center which will house the equivalent of 2,500 PCs and a million gigabytes of storage over the next five yearsŠ and more than that over the decades-long lifetime of Atlas," Brock said.

To hear an interview with Brock go to:

Michigan State University has been advancing knowledge and transforming lives through innovative teaching, research and outreach for more than 150 years. MSU is known internationally as a major public university with global reach and extraordinary impact. Its 17 degree-granting colleges attract scholars worldwide who are interested in combining education with practical problem solving.