Michigan State University's nuclear physics graduate program has retained its number 1 position in the 2018 national rankings recently published by U.S. News & World Report. MSU first overtook MIT as #1 in the 2010 rankings, and has been at the top of the rankings ever since.

Among the reasons for MSU's prominence in the rankings are that nuclear physics students have access to world-class facilities on campus at the National Superconducting Cyclotron Laboratory (NSCL) and the Facility for Rare Isotope Beams (FRIB), and students have opportunities to pursue interdisciplinary work, combining studies of nuclear physics with related fields such as computational science, accelerator physics and astrophysics.

“The continuing leadership of the MSU nuclear physics program is driven by a combination of the excellence of the faculty, staff and students of NSCL and FRIB and strong support from the National Science Foundation and U.S. Department of Energy Office of Science,” said Phil Duxbury, Department of Physics & Astronomy chair. “The future looks very bright with growing expertise in fundamental nuclear physics, nuclear astrophysics and accelerator physics, and with new collaborations in other areas of science and technology at MSU and across the nation.” 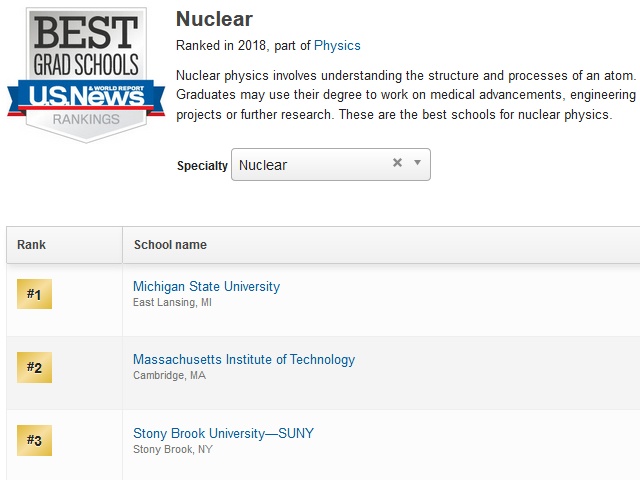 The Physics & Astronomy graduate program as a whole was 28th nationally in this year's rankings.

Nuclear Physics is one of five graduate programs at MSU ranked #1 among U.S. programs this year, along with three other programs in fields not specifically rated this year, but which retain their #1 ranks from previous years' ratings. There are several other graduate programs ranked in the top ten of their fields of study as well. For more details, see this March 20, 2018 MSU Today article.

Complete rankings and an explanation of rating procedures may be found at the U.S. News & World Report web site.