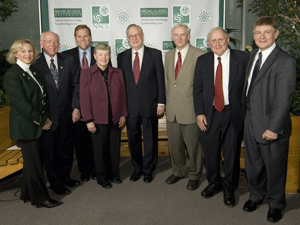 The National Science Foundation (NSF) has awarded the National Super-conducting Cyclotron Laboratory at MSU more than $100 million to fund operations through 2011, highlighting the lab's status as a world-leading nuclear science facility.

Arden Bement, director of NSF, will visit East Lansing today to formally acknowledge the grant renewal, which will allow the cyclotron laboratory to continue pushing the frontiers of knowledge in rare isotope science, training the nation's next generation of nuclear scientists, and attracting undergraduate students to basic science.

"Renewal of our five-year operating grant is good news for our user community, which includes some 700 researchers from 100 institutions in 35 countries," said Konrad Gelbke, cyclotron lab director and University Distinguished Professor. "The laboratory remains an important node in the international physics network, and we look forward to further expanding our cutting-edge research program and helping to shape the future direction of nuclear science."

The funding also bolsters the position of the National Superconducting Cyclotron Laboratory as an important anchor to mid-Michigan's emerging knowledge economy. The facility has nearly 300 local employees and a history of applied entrepreneurial projects.

"Scientists and engineers of NSCL, with their partners, are transforming knowledge about the properties of atomic nuclei into remarkable innovations," said Bement. "In the process, they are providing valuable hands-on research experiences for students that train them to become the next generation of skilled researchers, able to operate in a world in which partnerships in innovation are highly valued."

The lab's scientists investigate the properties of rare isotopes and nuclear reactions. These reactions, some of which take place in stars and exploding stellar environments such as novae and supernovae, continue to produce many of the atoms that make up human beings and indeed most of the observable world.

Currently, the laboratory operates one of the world's most advanced rare isotope research facilities, the Coupled Cyclotron Facility. There, ultrafast beams of stable isotopes - elements can have slightly different forms known as isotopes - are broken up and separated into beams of rare isotopes, which are then studied by researchers. The staff also is developing plans for a next generation laboratory - the working name for the planned facility is the Isotope Science Facility - on the MSU campus.

In recent years, scientists at the cyclotron laboratory have developed specialized and highly sensitive techniques that uncovered the origins of precious metals and allowed a closer look at atomic nuclei by stopping rare isotope beams moving at nearly half the speed of light.

"We take pride in being recognized as a national and international leader in rare isotope physics," said President Lou Anna K. Simon. "The work of NSCL has long been an essential part of MSU's science portfolio, one that attracts top researchers and scientists from around the world to Michigan State and can yield innovations that spawn new businesses to benefit both Michigan and the world."

"We will continue to support a broad program of applied, technology-focused projects, some of which will have commercial potential and create knowledge economy jobs," said Gelbke. "But we remain most energized by our core mission: exploring the unknown in basic nuclear science and the origins of elements in the cosmos."

The funding decision, made after a detailed review of the laboratory by NSF-appointed experts, will enable the cyclotron laboratory to build on its recent momentum. In March, U.S. News & World Report ranked MSU's graduate program in nuclear physics second nationally behind MIT, based on a survey of academic department heads and directors of graduate studies at peer institutions. Two months later, the lab's associate director, Thomas Glasmacher, received the 2006 Sackler Prize in the Physical Sciences, which recognizes scientists younger than 40 who have made a significant contribution to their field.
Glasmacher was honored for developing new, ultrasensitive techniques to study the structure of exotic nuclei.

This article was by Geoff Koch, NSCL (an original MSU News Bulletin article which was at http://www.newsbulletin.msu.edu/oct2606/nsclFunds.html, but which appears not to have survived some web upgrade on that site)