Analysis of the composition of meteorites by a research team at the National Superconducting Cyclotron Laboratory (NSCL) has turned up evidence that microscopic dust particles imbedded in some meteoritic materials show signs of possibly having been produced in stellar explosions long before the solar system formed.

The NSCL researchers have published early results of their findings in an article in the prestigious journal Physical Review Letters. The paper's lead author is MSU Physics & Astronomy graduate student Michael Bennett, and the research group is headed by Assistant Professor Christopher Wrede. They are investigating whether the particles may have formed in a classical nova, a thermonuclear explosion on the surface of a small star which is part of a binary star system – two stars orbiting each other. This explosion would have ejected stellar material in the form of gas and dust into the space between stars in the galaxy. Some of that material would have been used in the creation of our solar system. 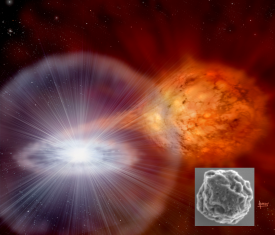 The microscopic dust particles being studied show an unusual mixture of isotopes of the element silicon. Most silicon atoms have 14 protons and 14 neutrons, for a total atomic mass of 28; this isotope is generally called silicon-28 (or 28Si in print, as an abbreviation). Some have other numbers of neutrons. The silicon isotopes with 15 and 16 neutrons (silicon-29 and silicon-30, respectively) are both stable, too. In most materials observed on the earth's surface, the fraction of a total silicon sample which is made up of a particular isotope varies very little from an overall average. The fraction of silicon-30 in the meteoritic dust being studied, however, is significantly higher than the fraction seen in ordinary terrestrial silicon.

The researchers have carried out experiments on the properties of a radioactive isotope known to influence the production of silicon isotopes, phosphorus-30, and have combined the results of this experimentation with computer models of nova explosions in order to assess the possibility that conditions in novae might result in the enhanced fraction of silicon-30 seen in the meteoritic material.

For more information you may read this article on the NSCL website or this MSU Today article.