January 23, 2002 - Gov. John Engler, in his State of the State address Wednesday night, declared Michigan the “Technology State” and backed Michigan State University’s bid to be the home of one of the world’s most powerful research facilities.

What they’re saying about RIA:

“East Lansing is excited about the prospect of such a prestigious addition to the research strength on the Michigan State University campus. Not only will the Rare Isotope Accelerator deepen the economic diversity of our area, but it also would continue our tradition of welcoming some of the world’s best minds to our community.”

"The RIA development fits with Lansing's vision and plans for a technology-based future. Securing RIA would result in a powerful new economic direction for the Greater Lansing area. We are eager to welcome RIA to our community."

Engler pledged a “down payment” from the state to make MSU home to the proposed Rare Isotope Accelerator. RIA will be the world’s most powerful research accelerator facility. It has been identified by the Nuclear Science Advisory Committee of the U.S. Department of Energy and the National Science Foundation as the “highest priority for major new construction.”

MSU, home of the National Superconducting Cyclotron Laboratory, contends it is the logical home of the proposed laboratory, and that RIA is a natural extension of the groundbreaking physics research done at the NSCL.

“RIA at MSU is a win-win situation,” said University Distinguished Professor Konrad Gelbke, NSCL director. “A university environment is where a national facility like RIA belongs; where teaching and research can be entwined. It also will be a tremendous economic boost for the area and for Michigan, offering jobs and prestige. RIA will take Michigan where it wants to go.”

MSU President Peter McPherson agreed, noting by supporting RIA at MSU, Engler is strengthening his commitment to technology and to the concept of the Life Sciences Corridor.

“Attracting RIA is a strong part of the vision of Michigan as a place where the nation and the world turns for answers to the questions of tomorrow,” McPherson said. “We are delighted that Gov. Engler is such a strong supporter of that vision.”

On the web: RIA 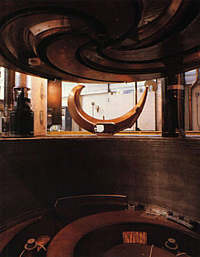 The NSF has increased its five-year operations and research funding of the National Superconducting Cyclotron Laboratory (NSCL) at MSU from roughly $50 million to $75.06 million, said Konrad Gelbke, NSCL director.

Annually, about $10.4 million will fund the increased operating expenses incurred by the laboratory's recent upgrade. Three million dollars will fund MSU nuclear science research at the facility, and $1 million will go toward continuing work to build new and better accelerators.

"This is a tremendous vote of confidence from the National Science Foundation and acknowledges the great strides we've made in truly becoming a research facility for the world," Gelbke said. "We are expecting to do great things here."

Cyclotrons hurl atomic nuclei against each other in order to unravel some of the basic truths of the universe: what we and the world around us are made of, how the elements are formed, and how stars shine and evolve. Nuclear physicists use cyclotrons to recreate the cauldrons that exist inside stars and that result when stars die in gigantic explosions, called supernovae. It's in these cauldrons that short-lived rare isotopes become fleeting, essential ingredients to the recipe for concocting the elements.

This will mean beams so powerful that MSU can get done in half a day what in the past would have taken a year, Gelbke said.

Upgrading the facility has meant more complex equipment, which in turn requires more support to the scientists who come from across the globe to do experiments at MSU. The lab has created 14 full-time positions to accommodate this need, said Rex Morin, executive director of the NSCL.

"It is critical the availability of our experimental devices be high," Morin said. "We now are offering the ability to do experiments that never have been done before. We must make our facility easy for scientists to use."

Some of the questions scientists will be exploring revolve around understanding how heavy a particular element can be. Scientists think that rarest isotopes of even common elements like aluminum can be two or more times heavier than normal. The new NSCL facility will allow these predictions to be tested, said Brad Sherrill, associate director for nuclear science.

"So far, we understand the limits of the first eight elements in the periodic table - up to oxygen," Sherrill said. "Now, our lab can go farther, to the first 16 elements. No one else in the world can do that right now."

On the web: NSCL