A scientific video, "First Light in Renaissance Simulation: Formation of the Very First Galaxies in the Universe", narrated and based on research by Michigan State University Associate Professor Brian O'Shea, won the Best Scientific Visualization and Data Analytics Showcase Award at the 17th International Conference for High Performance Computing, Networking, Storage and Analysis (SC 17), held in Denver, Colorado from November 12th to 17th, 2017.

Submitted videos are judged based on how the movie illuminates science, by the quality of the movie, and for innovations in the process used for creating the movie.

The video was produced by a team at the Advanced Visualization Lab (AVL) at the National Center for Supercomputing Applications (NCSA) at the University of Illinois under the direction of NCSA AVL Director Donna Cox. The scientific simulation upon which the video is based, "Formation of the First Galaxies: Predictions for the Next Generation of Observatories", was run on the NCSA's Blue Waters supercomputer by a research team led by MSU's Dr. O'Shea, with other team members from UC San Diego, Georgia Tech, and Chosun University.

The winning video is a two-part visualization that begins shortly after the Big Bang, and richly details simulations of the evolution of the first galaxies in the universe over the first 400 million years of the development of the universe, in increments of about 4 million years. The second part of the visualization tours the universe at the 400 million year mark, and flies the viewer through the data, breaking down the different variables that are being visualized — filaments of dense gas, pockets of elevated temperature, metals, ionized gas, and ultraviolet light.

"First Light in Renaissance Simulation: Formation of the Very First Galaxies in the Universe" is available for viewing on Youtube at https://www.youtube.com/watch?v=js6KGG9hJ1I .

It is also highlighted in the larger documentary feature "Seeing the Beginning of Time", directed by Thomas Lucas and co-produced by the NCSA AVL and Thomas Lucas Productions as part of a National Science Foundation-supported project called CADENS (Centrality of Advanced Digitally Enabled Science). 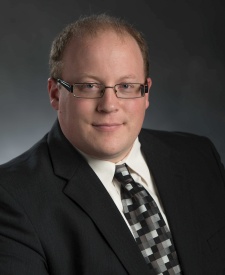 “It's a pleasure to work with Dr. Cox and her team at the AVL to visualize my research group's calculations,” Dr. O'Shea said of his collaborators. “They're amazing artists, and do a wonderful job of capturing the scientific meaning of complicated scientific simulations in a way that is accessible to both scientists and the general public. I'm delighted and humbled that our work received this award, and along with it recognition from our community!”

Brian O'Shea holds a joint faculty appointment in the Department of Physics & Astronomy, the Department of Computational Mathematics, Science & Engineering, and the National Superconducting Cyclotron Laboratory (NSCL). He is also senior investigator of the Joint Institute for Nuclear Astrophysics – Center for the Evolution of the Elements (JINA-CEE), the Michigan Institute for Plasma Science and Engineering, and the Great Lakes Consortium for Petascale Computation.

In October 2016, he was named a Fellow of the American Physical Society for “outstanding contributions to the study of cosmological structure formation using large-scale supercomputing, and leadership in the development of computational science research and education” after nomination by the APS Division of Computational Physics.

Part of a frame from the award-winning video "First Light in Renaissance Simulation: Formation of the Very First Galaxies in the Universe"