Considered among the world's leading awards for lifetime achievement, the Kyoto Prizes are presented to individuals and groups worldwide who have contributed significantly to human progress in the areas of "Advanced Technology," "Basic Sciences," and "Arts and Philosophy."

Each laureate received a diploma, a Kyoto Prize gold medal, and a cash gift of 50 million yen (approximately US$400,000) during prize ceremonies at the Kyoto International Conference Hall, with workshops and lectures continuing through November 12.

The 2003 Kyoto Prize for Basic Sciences was chosen from the field of Earth and Planetary Sciences, Astronomy and Astrophysics. Physicist Eugene Newman Parker received the award for establishing a new perspective on astrophysics by elucidating the phenomena of the solar wind and cosmical magnetohydrodynamics.

In 1958, Eugene Parker discovered that a stiff wind blows incessantly from the sun, filling local interstellar space with ionized gas. 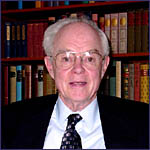 With this discovery came much opposition and adamant adversaries; however, in 1962 his theory was proven through direct satellite observation, and is now universally accepted. Having shown that the space between the sun and the Earth is filled with this supersonic flow of charged particles -- and not a vacuum, as had been believed -- his theory triggered drastic changes in the perception of space. His discovery has opened new dimensions in Earth and space sciences, and has become the bedrock of solar astronomy. Through his work there have been studies that show how the sun and its "solar wind" are capable of disrupting electrical power, short-wave radio, television and telegraph signals, navigational equipment (GPS and LORAN), military early-warning radar systems, the climate, and even communication satellites. In addition to his findings on solar wind, he used cosmical magnetohydrodynamics (the study of the interaction of magnetic fields in space) to explain the process that creates the solar magnetic field, what has now come to be known as the "Parker Instability." His theories have been used to expound on the mechanisms of geomagnetic storms, auroras, the creation of distant stars, and other solar-terrestrial phenomena.

Eugene Parker is the S. Chandrasekhar Distinguished Service Professor Emeritus in Physics, Astronomy & Astrophysics at the University of Chicago. He received his BS degree from Michigan State University in 1948. His daughter, Joyce Parker (DSME), and son-in-law, Ed Loh (Physics-Astronomy), are both MSU faculty members. Dr. Parker has decided to donate 1/4 of the Prize money to MSU's SOAR telescope.