In a ceremony held on 14 September 2017, Johannes Pollanen, Assistant Professor in the MSU Department of Physics and Astronomy, was formally invested as a Jerry Cowen Chair of Experimental Physics.

The endowed chair was established by the late Professor Jerry Cowen's son, Randy, who represented the Cowen family at the investiture ceremony at MSU's Biomedical and Physical Sciences Building, home to the Physics and Astronomy Department. 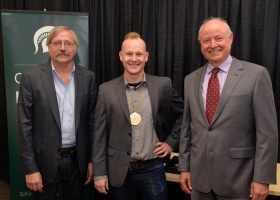 Randy Cowen (left), son of Jerry Cowen, poses with Johannes Pollanen (center) and Phil Duxbury, Department of Physics and Astronomy chair, following Dr. Pollanen's investiture as a Jerry Cowen Chair of Experimental Physics. Randy Cowen established the endowed chair in honor of his father's life and career as a physics professor at MSU.

“This chair honors my father, who had a passion for research and teaching, especially in working with his graduate students,” Cowen said. “We felt that the right way to honor him was creating a chair so that the university – especially the physics department, which is where my father spent his whole life – had the opportunity to go out and recruit extremely talented young professors to come, be endowed chairs, and grow their careers at Michigan State and in this department. I thank the university and the physics department for providing an environment where this can happen in a way that is great for MSU, great for the faculty and students, and great for our family.”

Pollanen received his B.S. in physics from the University of North Carolina at Chapel Hill and his Ph.D. in experimental condensed matter physics from Northwestern University. Before joining MSU in 2016, he was a postdoctoral fellow at the Institute for Quantum Information and Matter (IQIM) at the California Institute of Technology. While at Northwestern, he discovered a new chiral quantum state of superfluid 3He, which he engineered by introducing anisotropic disorder to the superfluid in the form of high porosity silica aerogel. During his time at Caltech, he demonstrated a novel method for controlling the orientation of a class of 2d electronic liquid crystalline phases of matter that exist in ultra-clean semiconductor structures.

“As a young assistant professor in the field of experimental quantum physics it is an amazing honor to hold a Cowen Chair faculty position,” Pollanen said. “It's clear to me that Randy Cowen has an incredible passion for physics; and the support that he provides to the department, and to my research group specifically, is vital for creating an atmosphere where exploration and discovery can flourish.”

Professor Philip Duxbury, Chair of the Department of Physics and Astronomy in the MSU College of Natural Science, was thrilled that the department was able to attract Pollanen to its faculty. “Congratulations to Johannes Pollanen, who is the newest Jerry Cowen Chair of Experimental Physics,” Duxbury said. “He is an outstanding experimentalist studying quantum science at the most fundamental level; and he is developing devices that may eventually yield disruptive quantum information or sensing technologies. The Cowen endowment is vital to our department's ability to recruit faculty of Johannes' caliber.”

The Cowen Endowed Chair program was established in honor of Jerry Cowen, who received his Ph.D. in physics from Michigan State University in 1954. In 1955, he and his wife, Elaine, moved to Okemos, Michigan, upon his joining the faculty of the MSU Physics Department – a position that he held until just weeks before his death in 1999. Professor Cowen excelled in both materials science research and teaching. His research spanned five decades and included many international collaborations.

In addition to Pollanen, Matthew Comstock, an Assistant Professor in the Physics and Astronomy Department, also currently holds a Cowen Chair.

[Photos courtesy of the MSU College of Natural Science]