Several members of the MSU physics department played a key role in the recent finding of evidence for single top quarks produced in a rare subatomic process involving the weak nuclear force. The MSU scientists are members of the DZero collaboration at the Department of Energy's Fermi National Accelerator Laboratory near Chicago, Illinois, where the measurement was made. C.-P. Yuan, professor of physics at MSU, was excited to hear about the result; after all, he had predicted how the discovery could be accomplished back in 1990.

The announcement was made in a seminar at Fermilab on 08 December 2006 and the corresponding paper was submitted a few days later. The result is an important test of predictions made by particle theory, such as the number of quarks that exist in nature. In the longer term, the techniques employed in this analysis will allow scientists to search for an even more elusive particle, the Higgs boson. 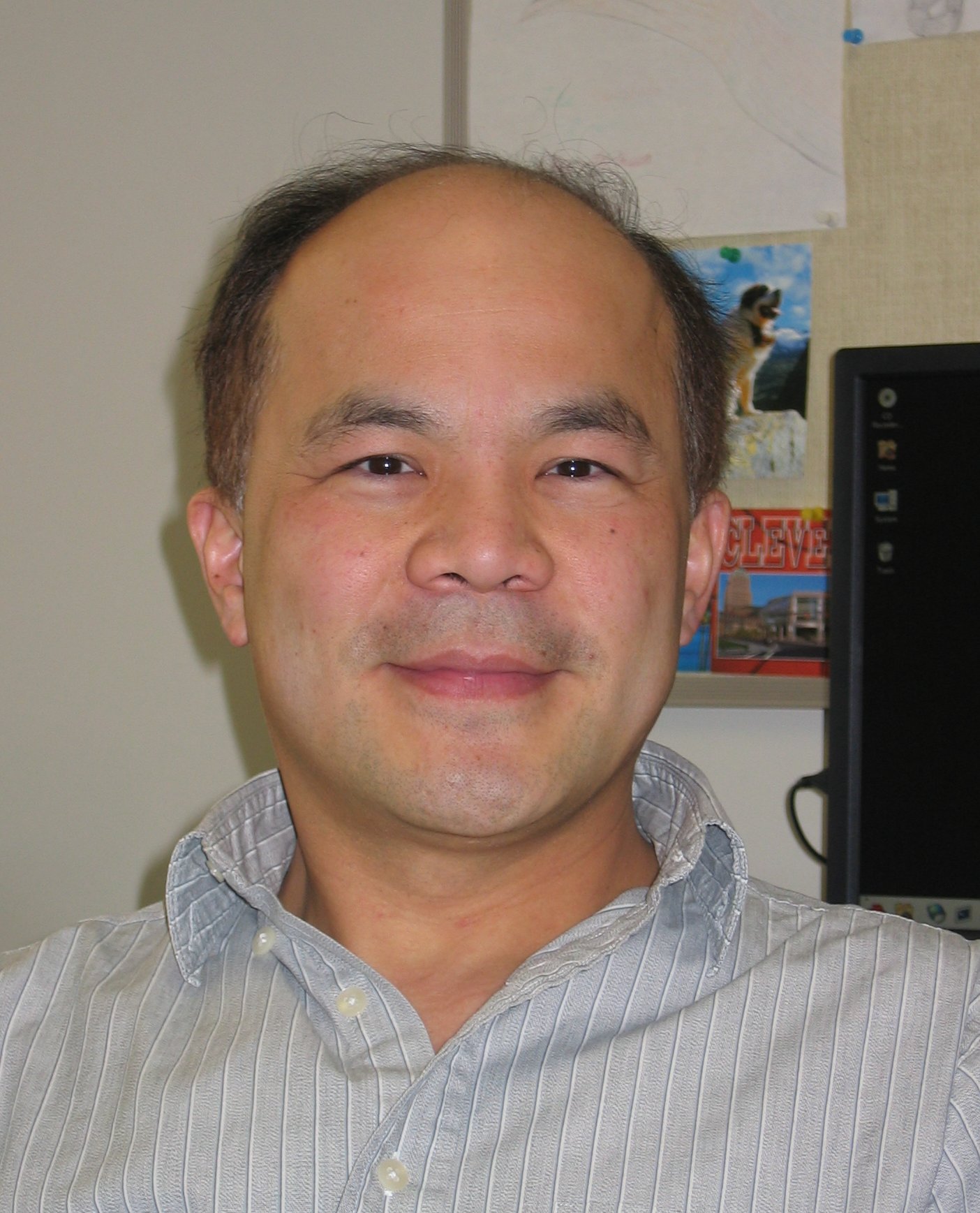 Yuan is a well-known elementary particle theorist, and has been a pioneer in the study of the top quark and its interactions. "The possibility for a heavy quark to be singly produced via the weak interaction was first pointed out by Sally Dawson (now Chair of Brookhaven Laboratory's Physics Department) in 1985, followed by a better calculation performed in 1986 by Duane Dicus and Scott Willenbrock (both were at the University of Texas at Austin)" explained Yuan. "But I was the first person to take a heavy top quark seriously enough to investigate methods for its direct detection at high energy colliders." He proposed the relevant strategies for discovering this process in a 1990 paper. "As I recall, it took a while for my 1990 paper to be published because it was commonly believed at the time that the top quark is relatively light. Contemplating the strong aspect of the weak interaction on a heavy quark, I guessed that the top quark could be much heavier." The top quark was discovered five years later, by the Dzero and CDF collaborations at Fermilab. The top quark mass turned out to be close to Yuan's guess, much larger than commonly expected back in 1990.

Starting from a million billion proton-antiproton collisions produced by Fermilab's Tevatron, the world's most powerful particle collider, the DZero collaboration used modern sophisticated analysis techniques to search for about 60 collisions, each containing a single top quark. Up to now, scientists had observed the top quark only in subatomic processes involving the strong nuclear force, which produces pairs of top and antitop quarks. Those observations, made by both the DZero and CDF experiments at Fermilab, led to the discovery of the top quark in 1995.

The signature of single-top events is easily mimicked by other subatomic processes that occur at much higher rates. To stand a chance of seeing the single-top signal, physicists at the DZero experiment had to develop sophisticated selection procedures that go significantly beyond the strategy outlined in Yuan's 1990 paper. The first stage selected approximately 1,400 candidate events. Of these candidates, only about 60 single-top events were expected, and experimenters exploited every bit of information to unambiguously establish their presence. Dzero scientists used three different techniques to combine some 50 discriminating variables to represent the results. These distributions allowed physicists to recognize the presence of single-top events-much like a mother's uncanny ability to distinguish between identical twins. 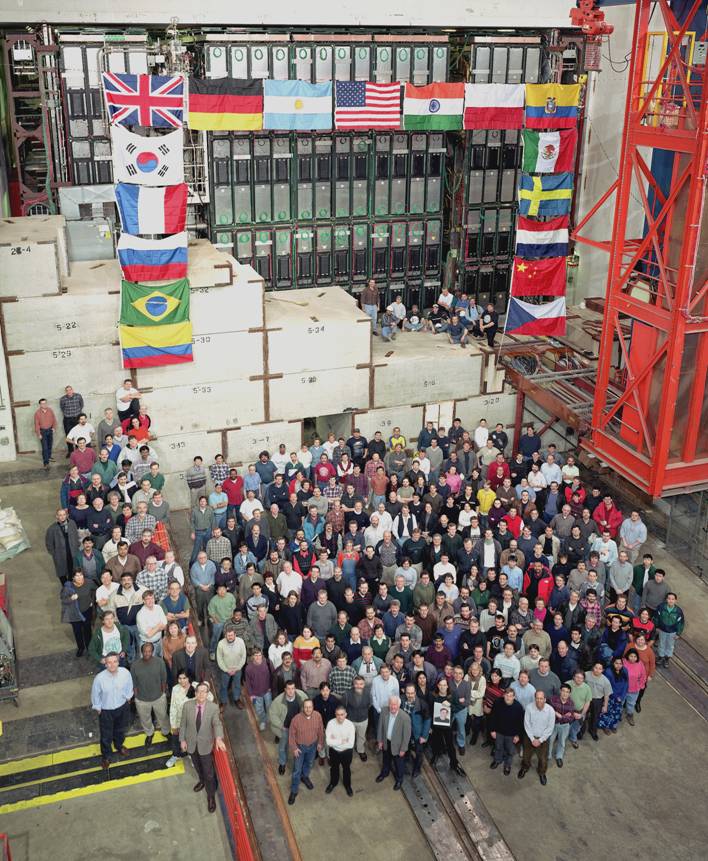 Dzero collaboration in front of the Dzero detector.

Physics professors Maris Abolins, Raymond Brock, James Linnemann, Bernard Pope, and Reinhard Schwienhorst, together with MSU engineers, research associates, and students are all working on the Dzero experiment, where they are collaborating with over 600 physicists from 20 different countries. The MSU group has played an important role in this collaboration for over 20 years, for example taking on responsibility for many parts of the trigger system, which is the first step in selecting interesting events. Professors Brock and Schwienhorst as well as graduate student Jorge Benitez have been directly involved in the analysis for the past three years. Schwienhorst, who recently joined the physics department faculty, led the analysis effort at Dzero for two years. He was working as a research associate at MSU at the time and remembers all of the hard work that has gone into this result. "We have been preparing for this moment for the past three years, and finally finding evidence for single top quark production is very rewarding." says Schwienhorst. "Extracting the small single-top signal out of the huge sea of backgrounds is like looking for a needle in a haystack. We were able to find the needle only by employing state-of-the-art analysis techniques, each carefully tuned to look for our needle."

Separating a handful of single-top events from two billion events recorded since 2002 allowed the DZero collaboration to determine one of the most important unmeasured parameters of the Standard Model of particles and forces, known as Vtb (pronounced "V T B"). This parameter determines the rate of single-top production: If there are only six quarks, as scientists have observed so far, theory predicts the magnitude of Vtb to be close to one. Departures from this magnitude would be a sign of new physics, indicating the existence of additional quarks or other fundamental particles. The DZero collaboration determined the magnitude of Vtb to lie within the range of .68 to 1.0 with a 95 percent probability, consistent with the Standard Model. Collecting more collision data and further refining the analysis will yield tighter constraints on the value in the upcoming months and years.

Schwienhorst is already looking towards the future: "The Tevatron is operating very well and the experiment is recording more data daily. We are now working very hard to extract more of this feeble signal in order to study it in more detail."

"It is an exciting possibility that the top quark might very well be a special quark because it is such a heavy quark", says Chris Hill (Head of Fermilab's Theoretical Physics Department), to which Yuan adds: "Its weak interactions could reveal secrets about the origin of elementary particle masses." With the increases in data accumulated at the Fermilab Tevatron and the upcoming of the CERN Large Hadron Collider, we will be able to learn much more about the top quark and the masses of elementary particles in the near future.

The full Fermilab annoucement is at:
http://www.fnal.gov/pub/presspass/press_releases/Single-Top.html.