Professor Emeritus Thomas A. Kaplan passed away on December 30, 2017. He was 91 years old.

Tom Kaplan joined the Physics faculty at MSU in 1970 and taught courses into the 1990s. Until his illness in late August 2017, he went to the office daily and continued to actively research and publish. Among many honors, he received the Alexander von Humboldt Senior Scientist award, was a Distinguished Visiting Professor, University of Tsukuba, Japan, and was included in the American Physical Society/American Institute of Physics' publication, The Physical Review - The First Hundred Years. He was recognized as an APS Outstanding Referee in 2009. He was a member of the American Physical Society, Sigma Xi and the Union of Concerned Scientists. 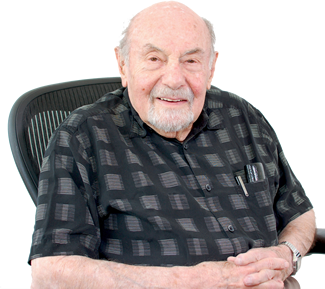 His research interests were mainly in understanding magnetism on a microscopic scale, including theories of complex magnetic ordering, electronic structure theory behind models of such ordering (and disordering), e.g., Heisenberg models, etc. This extended more recently into the field of multiferroics, the connection between complex magnetic ordering and ferroelectricity. He also investigated some theoretical aspects of quantum entanglement which may be of potential use in information technology.

He received a B.S. degree in Mechanical Engineering from the University of Pennsylvania in 1948 and went on to get his Ph.D. in Physics there in 1954.

He delighted in family gatherings, watching sports (as an avid Spartans fan), practicing trumpet nightly, traveling around the world with wife Pat, and sharing a corny pun.