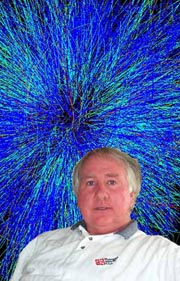 A few microseconds after the big bang, the universe existed as a soup of quarks and gluons.  These quarks and gluons were not confined in nucleons as we find them today but instead formed a plasma of nearly massless quarks and gluons.  Using the Relativistic Heavy Ion Collider (RHIC) at Brookhaven National Laboratory on Long Island, New York, nuclear physicists are attempting to recreate this state of matter (on a small scale, of course!) by colliding two beams of gold nuclei each with kinetic energies of 100 GeV/nucleon.  This energy is thought to be high enough to create an extended system of deconfined quarks and gluons.  To detect the quark-gluon plasma, nuclear physicists have created four specialized detection systems to measure the expected 10,000 particles per collision; STAR and PHENIX, PHOBOS and BRAHMS. 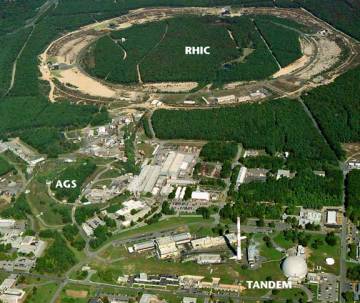 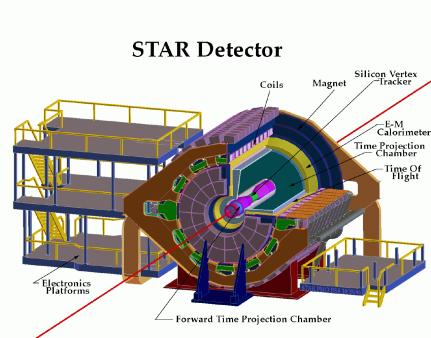 A drawing of the Solenoidal Tracker at RHIC (STAR).

Last summer RHIC began it first physics run with the first event being recorded by STAR June 12, 2000. The main part of the run was carried out with two gold beams of 65 GeV/nucleon giving a center of mass energy

= 130 GeV. A typical event observed by STAR is shown below as registered by the TPC. This view is looking down the beam axis at the TPC. This event is a central collision with about 1,500 tracks registered. RHIC and STAR finished the first physics September 2000 and will resume running early this summer and run through April 2002. 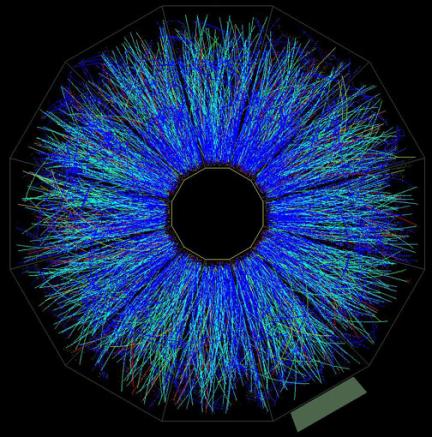 = 130 GeV recorded in the STAR detector at RHIC. The color of the track represents the energy loss of the particle in the P10 gas of the TPC with warmer colors signifying higher energy loss.

MSU nuclear physicist Gary Westfall and his group are collaborating in the STAR experiment. MSU is responsible for the construction of the optical fibers for the barrel EMC and the endcap EMC. The barrel EMC consists of 120 modules each containing 40 towers each with 21 layers of scintillator and towers each with 24 layers of scintillator and lead. Both the barrel and endcap EMCs have shower maximum detectors embedded at a depth of five radiation lengths to provide high spatial resolution and hadronic/electromagnetic separation. Completion date for the calorimeters is early 2004.

STAR has published its first physics result in Physical Review Letters (Phys. Rev. Lett. 86, 402 (2001) ) and has several more in preparation. MSU is carrying out an analysis project to clock the time of hadronization in RHIC collisions using the recently proposed balance function.

Gary Westfall is a member of the STAR Council and is the Convener for the Event-by-Event Physics Working Group in STAR. During the last run Gary Westfall served as Period Coordinator for the last two weeks of the run.

You can learn more about Gary's research at http://www.nscl.msu.edu/~westfall/