The endowed chair was established by the Tung family to honor the memory of Wu-Ki Tung, an internationally known particle physicist who taught and conducted research at MSU from 1992 to 2007. Wu-Ki's son, Lei, represented the Tung family at the investiture, held October 17th at MSU's Biomedical and Physical Sciences Building — home to the Department of Physics and Astronomy. 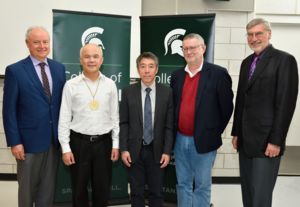 Following his presentation of the Wu-Ki Tung Professorship in honor of his father, Lei Tung (center) poses with Phillip Duxbury, chair of the Department of Physics & Astronomy (far left), C.-P. Yuan, the recipient of the honor (near left), Chip Brock, University Distinguished Professor of Physics & Astronomy (near right) and R. James Kirkpatrick, Dean of the MSU College of Natural Sciences (far right).

“My family and I are extremely gratified that the first award of this professorship in my father's name is going to C.-P. Yuan – someone who worked so closely with my father for many years, and who is, and has long been, a prominent member of the CTEQ [Coordinated Theoretical-Experimental Project on Quantum Chromodynamics] collaboration that my father believed so strongly in,” Lei Tung said. “There could not be a more fitting designation in terms of the alignment and continuity of the physics and the practice of and commitment to the collaboration and collegiality that we desire to support through the creation of this endowment. I have every confidence that C.-P. and the Wu-Ki Tung Professorship in Particle Physics will serve each other well, and that C.-P. will be the exemplar for all honorees to come.”

Yuan received his B.S. in physics from National Taiwan Normal University and his Ph.D. in physics from the University of Michigan. During his postdoctoral research, he pioneered the theoretical study of single top quark and its interactions in the early 1990s, leading to the discovery of its existence by electroweak interaction at Fermilab in 2006. Yuan joined MSU's Department of Physics and Astronomy in 1992 and was promoted to full professor in 2004.

Yuan uses global analysis of experimental data to explore partons — fundamental particles in protons and neutrons. His research has deepened the understanding of Quantum Chromodynamics theory, enabling more precise predictions of parton distributions at high-energy collider facilities throughout the world.

“It is a great honor to be selected as the first Wu-Ki Tung Endowed Professor in Particle Physics,” Yuan said. “In 2007, just before Wu-Ki retired from MSU, he asked me to carry on the legacy that he created here back in the 90s. I humbly accepted this challenge, knowing that it was not going to be an easy task. This generous gift from Tung family will undoubtedly enhance the research program on elementary particle physics at MSU. We will surely try our best to live up to Wu-Ki's high standards as we continue his legacy of excellence, scientific collaboration and collegiality.”

Yuan's exceptional research has been recognized with several honors, including being named a Fellow of the American Physical Society in 2013, serving as president of the Overseas Chinese Physics Association (2009-2010) and being named an Honorary Professor of Xinjian University, China, in 2015.

Philip Duxbury, professor and Department of Physics and Astronomy chair, was thrilled that the department was able to recognize Yuan and his contributions with this professorship.

“Congratulations to Professor C.-P. Yuan, who is truly deserving of the distinction of being the inaugural Wu-Ki Tung Professor in Particle Physics,” Duxbury said. “C.-P. has worked hard to establish international leadership in areas of physics that Professor Tung cherished; and he is a true successor to the legacy of honor, commitment and achievement in particle physics collaboration that Wu-Ki created in our department. We are very grateful to the Tung family, and particularly Lei Tung, for their generous commitment to this endowment and to Wu-Ki's legacy in our department.” 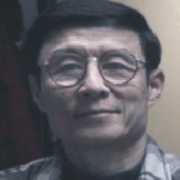 Wu-Ki Tung earned his doctorate at Yale, held research appointments at SUNY Stonybrook and the Institute for Advanced Study in Princeton, and served on the faculties of the University of Chicago, the Illinois Institute of Technology and the University of Washington (as an affiliated professor of physics) in addition to MSU; but he always considered MSU to be his spiritual and academic home. He led the worldwide high energy physics community toward a rewarding tradition of direct theory-experiment collaboration. Tung is best known for creating the Coordinated Theoretical-Experimental Project on Quantum Chromodynamics, or CTEQ, which brought particle physicists from two camps – experimental and theoretical – together into one research program. Based at MSU, CTEQ is one of only a handful of such groups, widely known and appreciated for changing the way in which measurements are made in the world of particle physics. Professor Tung passed away in 2009.