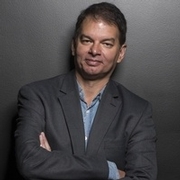 Dr. Adami is Professor of Microbiology & Molecular Genetics and Adjunct Professor of Physics & Astronomy at Michigan State University. As a computational biologist, Dr. Adami's main focus is Darwinian evolution, which he studies theoretically, experimentally, and computationally, at different levels of organization (from simple molecules to brains). He has pioneered the application of methods from information theory to the study of evolution, and designed the “Avida” system that launched the use of digital life (mutating and adapting computer viruses living in a controlled computer environment) as a tool for investigating basic questions in evolutionary biology. He was also a Principal Scientist at the Jet Propulsion Laboratory where he conducted research into the foundations of quantum mechanics and quantum information theory. He wrote the textbook “Introduction to Artificial Life” (Springer, 1998) and is the recipient of NASA's Exceptional Achievement Medal. He was elected a Fellow of the American Association for the Advancement of Science (AAAS) in 2011.