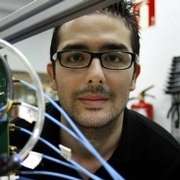 Saul Beceiro Novo was appointed as an Assistant Professor in the Department of Physics & Astronomy in the Spring of 2017. He had previously served as an instructor in the P-A Department (2015-2017) and a research associate in MSU's National Superconducting Cyclotron Laboratory (2012-2015). His statement of interests follows.

Since my undergraduate studies, I have been very curious about the "small world" and took the decision to focus in the study of nuclear matter when I started my Ph.D. I worked in the study of light exotic nuclei within the R3B collaboration of GSI (Darmstadt). My main interests were reactions of astrophysical interest.

After my graduation, I moved to MSU to continue exploring exotic light nuclei with the Active Target Time Projection Chamber (AT-TPC). It was an exciting time, since we built, commissioned and started running the detector.

At the same time, my passion for education made me focus in developing new physics courses, applying active learning techniques. In particular, I have worked in the ISP209 and 209L intro physics classes for non-science majors.

Mentoring is also a very important part of my work. I incorporate several undergraduate and graduate students in the laboratory work and I also coach the learning assistants of the department to better work with students.