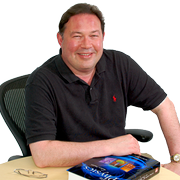 Tim Beers retired from his position in the Michigan State University Department of Physics and Astronomy effective 01 January 2013. After serving as the Director of Kitt Peak National Observatory in Arizona, he is now the Notre Dame Chair in Astrophysics at the University of Notre Dame.

Tim is interested in the origins of the Milky Way. For over 20 years, he has sought to identify tens of thousands of the oldest stars. Detailed studies of these stars with the high-resolution spectrograph of the SOAR telescope are revealing the "recipe of creation," the elemental abundances that were created by the first generations of explosive supernovae in the Galaxy. Some of the stars Beers identifies have detectable radioactive decay lines, such as Thorium, which are now being used to measure the age of the Universe. In this way, he is doing what he likes to call "cosmology with stars."