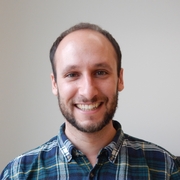 Tyler Cocker joined the MSU Department of Physics and Astronomy in January 2018 as an Assistant Professor.

Modern ultrafast science can famously trace its roots back to high-speed photography and stroboscopic snapshots of a racehorse in full stride. The concept of recording an image that corresponds to a particular time window endures, even though studying many of the most interesting condensed matter phenomena of today demands a high-speed ‘movie-making’ technique with not only far better time resolution, but also nanoscale spatial resolution.

The ultimate dream of watching single atoms, molecules, and electronic orbitals move on their intrinsic length and time scales has driven the development of new ultrafast microscopy techniques with spectacular capabilities. Among these, lightwave-driven terahertz scanning tunneling microscopy (THz-STM) is the only one able to capture ultrafast snapshots of single atoms. Prof. Tyler Cocker has played a central role in establishing and developing the field of THz-STM, including the recent demonstration that THz-STM can resolve femtosecond snapshots of the electron density in a single molecular orbital.

The Cocker Group at MSU is using the new possibilities enabled by THz-STM to explore ultrafast dynamics at the ultimate time and length scales of condensed matter physics. They are building a third-generation THz-STM with the aim of recording ultrafast movies of the electron densities inside single molecules, nanostructures, and complex materials. These prospective ‘nano-movies’ will reveal how new materials respond to light on the smallest length scales, and inform the design of future of nanotechnology and molecular electronics.

The Cocker Group is also interested in other ultrafast laser and terahertz techniques, especially scattering-type scanning near-field optical microscopy (s-SNOM). This is a complementary approach to THz-STM that accesses the local dielectric function beneath a sharp metal tip with sub-wavelength spatial resolution. It is especially useful for studying low-energy elementary excitations in materials such as plasmons, phonons, and interlevel transitions in excitons. These processes are of particular importance for nanomaterial functionality and typically survive for only femtoseconds to picoseconds after photoexcitation.

Before joining the Physics and Astronomy faculty at Michigan State University, Prof. Tyler Cocker spent five years working with Prof. Rupert Huber at the University of Regensburg, first as a postdoctoral researcher, then as an Alexander von Humboldt Fellow, and finally as a Junior Group Leader. He also held a Visiting Researcher position at ARCNL in Amsterdam, hosted by Prof. Paul Planken. Tyler did his Ph.D. work with Prof. Frank Hegmann at the University of Alberta , graduating in 2012.

The femtosecond snapshot imaging of single molecules done by Tyler and colleagues at the University of Regensburg in Germany was recently highlighted in a News Feature in Nature written by Mark Peplow. The article can be accessed at this link.