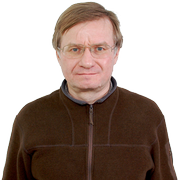 My research is in the area of nuclear theory with emphasis on central energetic reactions of heavy nuclei. In central reactions, unique conditions are created where nuclear matter may be compressed to densities much larger than those typical for nuclei and may be heated gaining thermal energy far in excess of the nuclear binding energy. The pressures achieved in those reactions are the highest produced by man. The compression of matter during a reaction is followed by a decompression that throws reaction products into different directions.

From the features of products emitted from a central reaction, the conditions reached during the reaction may be deduced as well as properties of matter that gets compressed. However, conclusions require a careful modeling of the reaction dynamics from the side of theory. The modeling is typically done within transport theory, and sample calculations are illustrated in the figure. In the course of reaction modeling, the theory, on one hand, seeks explanations for the results of measurements. On the other hand, it produces suggestions for what to measure next in order to verify the conclusions or in order to gain novel information on the nuclear medium.

Multiparticle final states of the reactions in measurements potentially contain enormous amount of information. E.g. for a state with 20 particles, each collision event yields 3x20=60 independent numbers just in terms of particle momentum components. Development of strategies for reducing the abundance of information to an information that can be absorbed by a human and is simultaneously useful, has called for the involvement of theory. With my personal participation, it became apparent how to relate the geometry of emission of products to the spatial geometry of a reaction characterized by the scale of 2•10-15m. Techniques have been developed to create, on a statistical basis, detailed images of final stages of the reactions with multiparticle final states.

Properties of matter of nuclear reactions naturally link with the properties of matter in finite nuclei. Following that link, I have ventured into aspects of nuclear structure, particularly with regard to the imbalance between the neutron and proton numbers in nuclei. Transport that is close to or fully within the quantum domain has elements that are common for different physics areas. The theory of nonequilibrium Green's functions, which I pursue in the context of reactions, has applications to atoms in electromagnetic traps and to early cosmology. Conversely, new theoretical methods got developed in the context of atomic traps, which I want to bring in to the area of reactions. 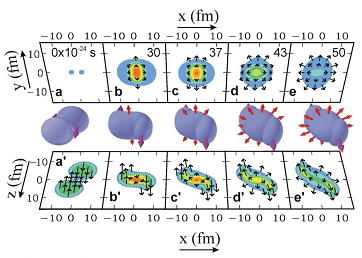 Overview of the dynamics for a Au+Au collision in the system center of mass. Time increases from left to right.