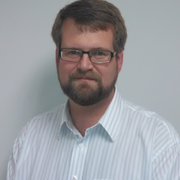 Dr. Tyce DeYoung joined the faculty of the MSU Department of Physics & Astronomy in August 2014. Here follows his statement about his research interests.

My research is in particle astrophysics, at the boundary of high energy physics and relativistic astrophysics. I use particles accelerated in some of the most extreme environments in the universe — near the supermassive black holes at the centers of active galactic nuclei, in the fireballs produced when gamma ray bursts explode, and in the relativistic shock waves emitted by galactic supernovae — to study fundamental physics such as neutrino oscillations. I am also interested in using these particles to study the astrophysical systems themselves, as a probe of physical processes that take place in environments not replicable on Earth. The detectors we build for these purposes can also be used to search for exotic forms of matter theorized to exist but not yet observed in the laboratory: dark matter, supersymmetric matter, and other particles beyond the Standard Model of particle physics.

I work on the IceCube Neutrino Observatory, a gigaton-scale neutrino detector at the South Pole, and presently serve as deputy spokesperson for the IceCube Collaboration. I am particularly interested in the next-generation extensions of IceCube such as PINGU. I also work on the HAWC gamma ray observatory. I often focus on software systems and I am especially interested in developing new techniques for data analysis, including statistical analysis techniques, machine learning and data mining, and application of numerical optimization techniques to event reconstruction.