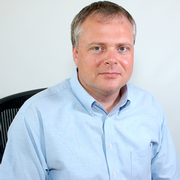 Thomas Glasmacher is the Laboratory Director and Project Director for the Facility for Rare Isotope Beams (FRIB), a $730M U.S. Department of Energy Office of Science (DOE-SC) scientific user facility under construction and supporting the mission of the Office of Nuclear Physics in DOE-SC. Glasmacher has responsibility and authority to execute the FRIB Project, including overall line management responsibility, for the design, construction, and transition to operations of FRIB, the management of all contractors, and ensuring the full project scope is delivered in a safe, cost-efficient, and environmentally responsible manner. He also is responsible for the administration of the FRIB Laboratory, which is the equivalent of a college within Michigan State University.

In 2008 Glasmacher led the team that prepared the winning FRIB proposal. He became the FRIB project director and project manager when the Cooperative Agreement between the U.S. Department of Energy (DOE) and MSU was signed in June 2009. He built the FRIB Project team and successfully led the team through conceptual design and alternative selection (Critical Decision 1), preliminary design and baselining (Critical Decision 2), final design, and into construction (Critical Decision 3a). FRIB is baselined to be completed in June 2022; the project team is managing to early completion in 2020.

Glasmacher joined the National Superconducting Cylcotron Laboratory at MSU in 1992 as an NSCL Fellow and performed research in intermediate energy nuclear physics. In 1995 he joined the MSU faculty in the Department of Physics and Astronomy and NSCL, where he is now a University Distinguished Professor. His research resulted in more than 200 publications and focused on exploring the structure of rare isotopes with new experimental techniques involving gamma-rays. This work was recognized in 2006 with the Sackler Prize in the Physical Sciences.