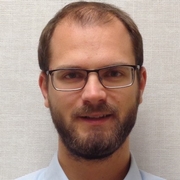 Philipp Grete joined the MSU Department of Physics and Astronomy as a Research Associate working with Associate Professor Brian O'Shea in October 2016.

His primary research interests include (magneto)hydrodynamic turbulence and its role in (astro)physical processes, using computer simulations to further our understanding of such topics as energy transfer in systems subject to compressible MHD turbulence.