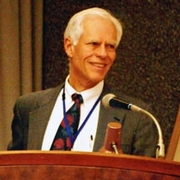 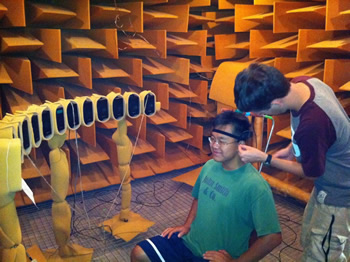 Figure: Tom is inserting tiny probe microphones into Cho's ear canals. Later, Cho will localize sounds from the 13 loudspeakers in the anechoic room, and his responses will be compared with recordings from the microphones.

The psychoacoustics group applies wave physics to the psychology and physiology of hearing. Recently the group has experimented on the human ability to localize the origins of sounds in space, especially reverberant space, where reflections lead to confusions.

The experimental data are used to test models of midbrain processes, developed in collaboration with neuroscientists who make electrophysiological recordings on other mammals.

In 1974 he began teaching an undergraduate course on musical acoustics which inspired his interest in human hearing. In 1976 he spent a sabbatical year at Harvard University working with Professor David M. Green learning psychoacoustics. He has continued to work in that field, in musical acoustics, and in signal processing since that time. He has been an adjunct professor in the MSU Department of Psychology since 1979. His published work in psychoacoustics deals with pitch perception, signal detection, modulation detection, and localization of sound. References to this work appear under various subject headings in the index . He has written one book, Signals, Sound, and Sensation (published by Springer-Verlag - AIP Press, 1997). Another book, Principles of Musical Acoustics, is in preparation.

In 1981-82, Dr. Hartmann took a leave of absence to work as a visiting scientist at the Institute for Research on Acoustics and Music (IRCAM) in Paris. He subsequently served at IRCAM as acting director of acoustics (1982-1983) and, supported by a NSF-CNRS grant, as consultant (1983-1987).

Dr. Hartmann has been a fellow of the Acoustical Society of America since 1983. He was chairman of the Technical Committee on Musical Acoustics from 1980 to 1984. From 1992-1995 he served on the Society's Executive Council and was chairman of the External Affairs Administrative Council (1994-1995). He gave the Society Tutorial at the spring meeting in 1996 entitled, "Pitch, Periodicity and the Brain." He served as vice president of the Society (1998-1999) and as president (2001-2002). As president, he worked to enhance the Society's connections with allied organizations such as the Institute for Noise Control Engineering, and to expand the Society's presence internationally.

He is currently the editor-in-chief of the Springer series Modern Acoustics and Signal Processing.

In 2001 Dr. Hartmann received the Distinguished Faculty Award from Michigan State University and the Helmholtz-Rayleigh Silver Medal from the Acoustical Society of America.