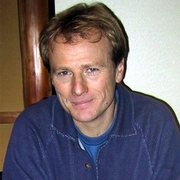 I am a theoretical physicist with an interest in many-body theory in general, and the nuclear many-body problem and nuclear structure problems in particular. This means that I study various methods for solving either Schroedinger's equation or Dirac's equation for many interacting particles, spanning from algorithmic aspects to the mathematical properties of such methods. The latter also leads to a strong interest in computational physics as well as computational aspects of quantum mechanical methods. A large fraction of my work, in close collaboration with colleagues at the NSCL and worldwide, is devoted to a better understanding of various quantum mechanical algorithms. This activity leads to strong overlaps with other scientific fields. Although the main focus has been and is on many-body methods for nuclear structure problems, I have also done, and continue to do, research on solid state physics systems in addition to studies of the mathematical properties of various many-body methods.

Why the nuclear many-body problem? you may ask. Well, for me, to understand why matter is stable, and thereby shed light on the limits of nuclear stability, is one of the overarching aims and intellectual challenges of basic research in nuclear physics and science. To relate the stability of matter to the underlying fundamental forces and particles of nature as manifested in nuclear matter is central to present and planned rare isotope facilities.

Examples of important properties of nuclear systems that can reveal information about these topics are masses (and thereby binding energies), and density distributions of nuclei. These are quantities that convey important information on the shell structure of nuclei with their pertinent magic numbers and shell closures, or the eventual disappearance of the latter away from the valley of stability.

Neutron-rich nuclei are particularly interesting. As a particular chain of isotopes becomes more and more neutron rich, one reaches finally the limit of stability, the so-called dripline, where one additional neutron makes the next isotopes unstable with respect to the previous ones. The figure here (taken from Phys. Rev. Lett. 109, 032502 (2012)) shows an example of a recent many-body calculation of the chain of calcium isotopes, including three-body forces, a much debated and studied issue in nuclear many-body theory. These calculations predict the dripline of the calcium isotopes at mass 60, partly in conflict with present results from mean-field and mass models used in astrophysical calculations. To understand of the limits of stability of the calcium isotopes is one of the benchmarks experiments of FRIB at the NSCL. 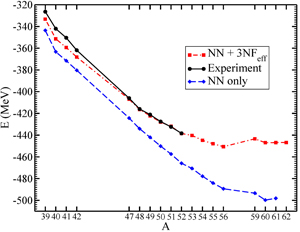 An example of a recent many-body calculation of the chain of calcium isotopes, including three-body forces, a much debated and studied issue in nuclear many-body theory.

Finally, I have always had, and have, a strong interest in educational matters. At the University of Oslo (I have the privilege to share my time between the University of Oslo and MSU) I have been very much involved in a large project called Computing in Science Education which deals with the introduction of computing in basic science courses as a way to enhance research based teaching, and hopefully lead to a better insight of physical systems. I'd be more than happy to discuss such matters as well.