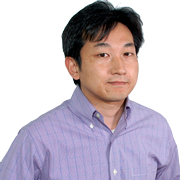 My research has focused on spectroscopy of exotic nuclei far from stability. Unstable nuclei with very unusual proton-to-neutron ratios, called "exotic nuclei", often show surprising phenomena, presenting important challenges for our understanding of atomic nuclei. The goal of present-day nuclear physics is to establish the unified understanding of nuclear structure for stable and exotic nuclei, by exploring the isospin degree-of-freedom of the shell structure and collective properties of nuclei. The physics outputs thus serve as vigorous tests for modern nuclear theories, as well as provide answers to questions concerning the nature of neutron stars and the origin of the elements in the Universe. Nuclear structure information can also be used to make tests of fundamental symmetries that describe the weak and strong forces in nature.

At NSCL, my group performs in-beam gamma and particle spectroscopy with rare isotope beams, with an emphasis on lifetime measurements for nuclear levels. Lifetimes for bound levels are closely related to transition probabilities between the relevant states, which provide sensitive probes for anomaly in structure of exotic nuclei, for example, shape coexistence, changes of magic numbers, and proton-neutron decoupling phenomena, and so on. For unbound levels, lifetimes can be associated with the energy uncertainties to be measured as the resonance widths, which play important roles in the stability of extreme quantum systems as well as in nuclear reaction rates of astrophysical interest.

Challenges in experimental studies for level lifetime measurements are to develop methodology and detection system, which are suitable for the use with rare isotope beams. Typical level lifetimes range from 1 nanosecond (10-9 s) to 1 femtosecond (10-15 s) for bound levels, and for resonances, lifetimes can be even 1 zeptosecond (10-21 s).

In the Figure, one of the techniques (Doppler-shift attenuation method) is demonstrated to measure level lifetimes in the order of 1 picosecond (10-12 s). Gamma rays are emitted from the reaction product (13B) traveling in the degrader foil. Lifetimes can be obtained by analysing the Doppler-shift effect of gamma rays, which can be a function of the gamma-decay and slowing-down processes of nuclei. Experimental programs are being planned at NSCL with fast and re-accelerated rare isotope beams. 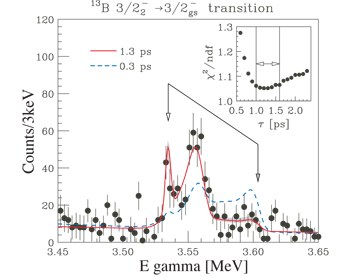 Energy spectrum of γ rays measured in coincidence with the neutron-rich isotope 13B. The broad spectrum indicates the isomeric transition at 3.53 MeV, which is well reproduced by the simulated spectrum (the red curve). The long lifetime observed characterizes possible co-existing phenomena between stable and metastable states in 13B.