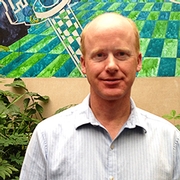 Steven Lund joined the NSCL in April 2014, with a joint appointment to the faculty of the MSU Department of Physics and Astronomy. Here follows a statement of his research interests and plans for investigating them here at MSU.

Charged particle accelerators have long been the driving engine of discovery in fundamental areas of physics such as high-energy physics, nuclear physics, and astrophysics as well as vital tool to probe material properties in a wide variety of manners in applied physics via accelerator driven light sources, spallation neutron sources, and microscopes. Accelerators also play a key role in applications such as materials processing, medical diagnostics and therapies, and potential advanced energy sources. This central role in science and technology has driven the field for many years and accelerator physics itself is a vibrant discipline of physics. Machines represent a tour de force on the creative use of physics and technology to produce a plethora of machines based on different concepts/architectures generating a broad range of beams for diverse applications. The field produces a rich range of applied physics problems providing opportunities for researchers and students to extend advances.

My field is theoretical accelerator physics emphasizing analytic theory and numerical modeling. Before arriving at MSU in 2014 to work on the Facility for Rare Isotope Beams (FRIB), I held a joint appointment at Lawrence Livermore and Berkeley National Labs working on physics issues associated with the transport of beams with high charge intensity, design of accelerator and trap systems, large- and small-scale numerical simulations of accelerators, support of laboratory experiments, and design of electric and magnetic elements to focus and bend beams. A common theme in my research is to identify, understand, and control processes that can degrade the quality of the beam by increasing phase-space area or can drive particle losses. Typically, laboratory experiments and support simulations identify effects, which are then further analyzed with reduced simulations and analytic theory to understand and mitigate any deleterious consequences. Graduate level teaching is used to clarify advances and place developments into context within the broader field. 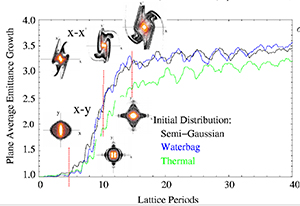 Simulations on the growth of beam phase-space volume due to violent space-charge induced instabilities.

At FRIB, I am presently seeking physics students with interests in charged particle dynamics, electromagnetic theory, and numerical modeling to assist me in simulations and theory in support of FRIB now under construction at MSU. The FRIB linear accelerator will deliver exceptionally high-power beams to support nuclear physics via beams of rare isotopes produced post-target. This should be one of the premier accelerator facilities for nuclear physics and will provide a fertile training ground for the next generation of accelerator physicists to join this vibrant field with broad opportunities.