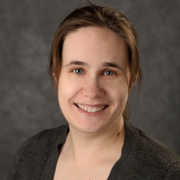 Kendall Mahn joined the MSU Department of Physics and Astronomy in 2014 as a high energy particle (HEP) experimentalist. In 2016, she became the ninth member of the department to receive a prestigious Sloan Research Fellowship since the program's inception in 1955. In the Fall of 2017, she became one of two analysis coordinators for the T2K Experiment. Her statement of research interests follows.

Elementary particle physics is a field devoted to understanding the fundamental forces and components of the universe. While our understanding of the universe, the Standard Model, has held up well to precision tests, there are recent indications that it is not a complete description. In particular, my interest is in the small subatomic particle, the neutrino. Neutrinos have a small, nonzero mass; the origin of this mass is not currently understood. We know neutrinos have mass as we observe "neutrino oscillation", a purely quantum mechanical effect where one neutrino type, or "flavor" will convert to a second kind over distances of hundreds to thousands of miles.

Current and future neutrino experiments will answer a series of open questions about neutrino oscillation. I am a proud collaborator on the Tokai-to-Kamioka (T2K) experiment, which uses a >99% pure muon neutrino beam sent over a distance of 295 km in Japan. In 2013, T2K announced the discovery of electron neutrinos' "appearance", that is, the conversion of muon neutrinos to electron neutrinos due to oscillation. This transition may have important implications for the matter-antimatter asymmetry of the universe, and is a necessary process to allow for future experiments, such as the Deep Underground Neutrino Experiment (DUNE) to search for CP violation in the neutrino sector. In addition to accelerator-based experiments like T2K and DUNE, the IceCube experiment, a neutrino observatory located at the South Pole makes precision measurements of neutrino oscillation in a complementary way to T2K.

An important component of my work is understanding how neutrino-nucleon interactions affect measurements of neutrino oscillation. Neutrino interaction models are used by a wide range of physics measurements and experiments. Improvements to such models are becoming increasingly critical for the global neutrino physics program, and my group is working on theoretical and new experimental initiatives to resolve puzzles related to neutrino interactions.