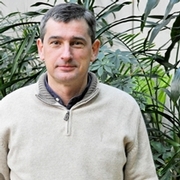 The experimental tests of the foundations of physical theories is a cross disciplinary domain that can hardly be grabbed by any particular subfield of physics. The measurements carried out for such tests are indeed made with particles, nuclei, atoms, molecules or crystals, and what does concern each of the specific subfields are the experimental techniques being used.

I have been involved in experimental tests of discrete symmetries in the weak interaction (parity violation and time reversal invariance) and in searches for new interactions through measurements using muons, neutrons and nuclei, which in most cases were polarized. Some measurements also required the use of traps (material-, electromagnetic-, or magneto-gravitational) for the confinement of particles for their study. Such precision measurements at low energies are considered an alternative route to the searches for new particles or phenomena carried out at the highest possible energies, in collider experiments. In general the principles of the experiments at low energies are rather simple but the measurements are difficult and challenging. The design of new experiments requires implementing modern techniques in order to reach new levels of sensitivity.

Atomic nuclei offer a very rich spectrum of candidates for precision measurements at low energies due to the large number of isotopes, the diversity of states and the different decay modes involving the fundamental interactions. The abundant production of rare isotopes opens further the spectrum for the design of new sensitive experiments.

The intellectual creativity in the design of experiments, and in particular those addressing the foundations of physical theories, is fascinating to me. The role of judge that some experiments may have in the survival of new concepts and the construction of theories is very exciting.