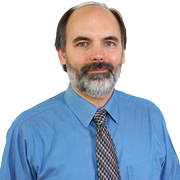 Approximately 270 isotopes are found naturally. However, many more isotopes, nearly 7,000 in total, can be produced by particle accelerators or in nuclear reactors. These isotopes are radioactive and spontaneously decay to more stable forms, and I work to produce and separate new and interesting ones.

There are several reasons why a latent demand exists within the scientific community for new, rare isotopes. One is that the properties of particular isotopes often hold the key to understanding some aspect of nuclear science. Another is that the rate of certain nuclear reactions involving rare isotopes can be important for modeling astronomical objects, such as supernovae. Yet another is that the properties of atomic nuclei can be used to test nature's fundamental symmetries by searches for deviations from known symmetry laws. Finally, the production of isotopes benefits many branches of science and medicine as th isotopes can be used as sensitive probes of biological or physical processes.

The tools for production and separation of rare isotopes gives scientists access to designer nuclei with characteristics that can be adjusted to the research need. For example, super-heavy isotopes of light elements, such as lithium, have a size nearly five times the size of a normal lithium nucleus. The existence of such nuclei allows researchers to study the interaction of neutrons in nearly pure neutron matter, similar to what exists in neutron stars.

For production of new isotopes, the approach that I have helped develop is called in-flight separation; where a heavy ion, such as a uranium nucleus, is broken up at high energy. This produces a cocktail beam of fragments that are filtered by a downstream system of magnets called a fragment separator. The efficiency of this technique can be nearly 100% and we are able to identify a single ion out of 1018 other particles. My group develops new techniques for fragment separation, and studies the nuclear reaction mechanisms that are used to product new isotopes. In the process we search for the most exotic isotopes possible in nature.

Research in this area includes study and design of magnetic ion optical devices. learning the various nuclear production mechanisms and improving models to describe them. This background allows one to contribute to science by making new isotopes, but also prepares one for a broad range of careers in academia, government (e.g. national security), and industry. 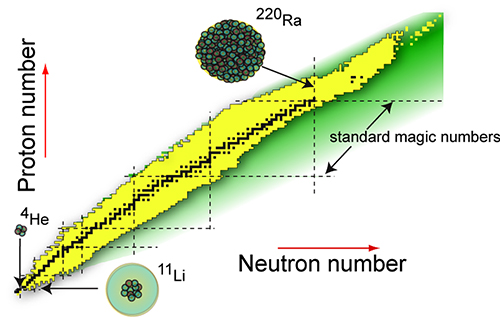 The rich variety of nuclei is indicated by the depiction of three isotopes 4He, 11Li, and 220Ra overlaid on the chart of nuclides where black squares indicate the combination of neutrons and protons that result in stable isotopes, yellow those produced so far, and green those that might exist. Nuclei like 11Li have very different characteristics, such as a diffuse surface of neutron matter, than do normal nuclei.