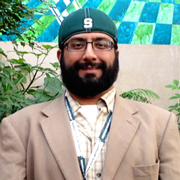 Jaideep Taggart Singh joined MSU Physics & Astronomy and the NSCL in August 2014. Here follows his statement of research interests and plans for investigating them here at MSU.

In the Fall of 2014, I will be forming a new group that will apply techniques borrowed from atomic, molecular, & optical physics to problems in nuclear physics. Our research interests include tests of fundamental symmetries, low energy searches of physics beyond the Standard Model, and studies of rare nuclear reactions. A particular emphasis of our group is creating, manipulating, and detecting spin-polarized nuclei.

Why is there something rather than nothing in the Universe? The answer to this question is thought to be closely linked to fundamental interactions between subatomic particles that violate time reversal symmetry. Although it has been known since the late 1960's that the Weak nuclear force slightly violates time reversal, its strength is far too feeble to explain the present day abundance of matter (as opposed to antimatter) in the Universe. The presence of a permanent electric dipole moment (EDM) of a particle is an unambiguous signature of an underlying time reversal symmetry violating interaction. A very sensitive technique to search for an EDM is a clock comparison experiment. In such an experiment, a clock is formed by placing a spin-polarized particle, such as a nucleus, in a very stable and very uniform magnetic field. The clock or spin precession frequency is then observed while an electric field is applied to the particle. An EDM would couple to this electric field causing a very small shift in the observed clock frequency. Over the last sixty years, all searches for an EDM based on this and similar techniques have yielded a null result. Because the observation of a nonzero EDM would have far reaching consequences, there is a world wide effort by many groups to search for an EDM in several different systems.

At the moment, our group is heavily involved in two ongoing EDM searches in nuclei. The first involves the rare isotope Radium-225 which, because of its unusual nuclear shape, is expected to have an enhanced sensitivity to new physics which violates time reversal symmetry. Because Radium has a very low vapor pressure, this experiment involves laser cooling and trapping techniques to make efficient use of the small number (thousands) of atoms available. The Facility for Rare Isotope Beams is expected to provide, among other things, a steady and intense source of Ra-225. This would allow for detailed studies of systematic effects that limit the sensitivity of the Ra-225 EDM search currently underway. The second EDM search involves the stable and abundant isotope Xenon-129, which is a naturally occurring component of air. This experiment involves the production of large Xe magnetizations using a technique called spin exchange optical pumping (SEOP) and very low noise magnetic flux detection using SQUIDs. A key component of this experiment is a state of the art (2.5 m)3 magnetically shielded room located in Munich, Germany. Our group will contribute to all aspects of these precision measurements providing expertise in ultra-low field NMR, optical pumping, electric field generation & characterization, ultra-high vacuum systems, cryogenic systems, laser manipulation of atoms, and ultra-low noise precision magnetometry.

Our group will also pioneer brand new techniques to capture, detect, and manipulate nuclei embedded in noble gas solids (NGS). NGS provide stable and chemically inert confinement for a wide variety of guest species. Confinement times and atom numbers in NGS exceed those of conventional laser traps by orders of magnitude. Because NGS are transparent at optical wavelengths, the guest atoms can be probed using lasers. Our group aims to demonstrate optical single atom detection in NGS which would provide a new tool for studying rare nuclear reactions. We also plan on performing a search for the permanent EDM of Ytterbium-171 using solid Neon to trap large numbers of Yb atoms. In addition to improving present constraints on the existence of time reversal violating interactions within nuclei, this experiment would provide a testing ground for next generation EDM searches potentially using rare isotopes that will become available when FRIB comes online.