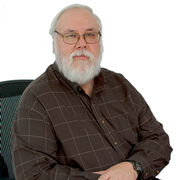 Horace Smith is one of the world's experts on the nature of the pulsating stars known as RR Lyraes and Cepheids. These stars can double their brightness on time scales of a few hours to a few days. The steady beats of these pulsating stars are like cosmic clocks, measuring the rate at which nuclear fuel is consumed in their cores. This connection between the pulsation period and the brightness of a star enables astronomers to measure the distance to the galaxy in which such a star lives. Horace is using SOAR to study variable stars in stellar systems at distances in excess of a million light years from Earth.

Information on the MSU campus observatory, as opposed to the off-campus SOAR telescope, can be found here.

The story of the Great Meteor Procession of February 9, 1913 can be found here.

Before It Came to Delphos: The Story of Leslie Peltier's 12 inch Telescope can be found here.