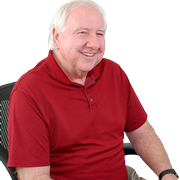 My research focuses on studying the quark-gluon liquid at the Relativistic Heavy Ion Collider (RHIC) at Brookhaven National Laboratory using the STAR detector. At RHIC, we collide gold nuclei at center-of-mass energies of up to 200 GeV per nucleon pair. At this energy, the protons and neutrons in the incident nuclei are transformed into a hot, dense, and strongly interacting liquid of quarks and gluons. This quark-gluon liquid is a nearly perfect liquid, which has nearly zero viscosity as evidenced by the comparison of flow measurements to hydrodynamic calculations. The universe is thought to have existed in this form a few microseconds after the big bang.

The main detector of STAR is its time projection chamber (TPC). This TPC can produce a full three-dimensional picture of the collision of two ultrarelativistic nuclei. A collision of two gold nuclei is shown as measured in the STAR detector. Each line in the picture corresponds to a single particle leaving the collision. Several thousand tracks are observed in this one central collision. The color of the track represents the ionization density of the track. By correlating the curvature of the track and its ionization density, the particles that created the track can be identified.

The three cornerstones of the observation of the quark-gluon liquid at RHIC are thermalization, collective flow and jet suppression. The spectra of particles emitted in gold-gold collisions can be well described by a blast-wave model incorporating a kinetic temperature and an expansion velocity. The relative number of various types of particles can be well described by a thermal model using a chemical temperature and a chemical potential. Collective flow manifests itself in terms of azimuthal anisotropies. The original anisotropy in the overlap region of the two colliding nuclei is translated into momentum correlations in the final state. Central collisions of gold nuclei also show strong jet suppression. By comparing gold-gold collisions with deuteron-gold and proton-proton collisions, RHIC experimenters were able to show that the quark-gluon liquid originates with the scattering of quark and gluons.

At the top RHIC energies, we observe a smooth transition from the quark gluon plasma to the hadrons observed in STAR. At the lowest RHIC energies, we expect a first order phase transition to occur when the quark gluon plasma hadronizes. The RHIC Beam Energy Scan is designed to provide incident energies at which the critical point may be observed. We are searching for this critical end point using correlation and fluctuation observables. Near the QCD critical point, fluctuations are expected to increase dramatically. 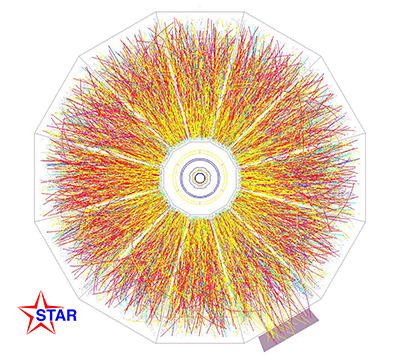 A central collision of two gold nuclei at 130 GeV per nucleon pair as observed in the STAR detector at RHIC. The figure is drawn looking down the beam line of RHIC.