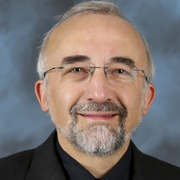 Dr. Witold “Witek” Nazarewicz joined the Facility for Rare Isotope Beams (FRIB) as a Hannah Professor of Physics in March 2014. Prior to coming to MSU Nazarewicz was a professor of physics at both the University of Tennessee and Warsaw University, Poland. He is also a corporate fellow at the Oak Ridge National Laboratory's Physics Division and a member of the Joint Institute for Heavy Ion Research directorate. Here follows information on his research interests and activities.

Atomic nuclei, the core of matter and the fuel of stars, are self-bound collections of protons and neutrons (nucleons) that interact through forces that have their origin in quantum chromo-dynamics. Nuclei comprise 99.9% of all baryonic matter in the Universe. The complex nature of the nuclear forces among protons and neutrons yields a diverse and unique variety of nuclear phenomena, which form the basis for the experimental and theoretical studies. Developing a comprehensive description of all nuclei, a long-standing goal of nuclear physics, requires theoretical and experimental investigations of rare atomic nuclei, e.g., systems with neutron-to-proton ratios larger and smaller than those naturally occurring on earth. The main area of my professional activity is the theoretical description of those exotic, short-lived nuclei that inhabit remote regions of nuclear landscape. Key scientific themes that are being addressed by my research are captured by overarching questions:

Most of the above physics problems invite a strong interaction between nuclear physics, many-body-problem, and high-performance computing.

Heavy nuclei are splendid laboratories of many-body science. While the number of degrees of freedom in heavy nuclei is large, it is still very small compared to the number of electrons in a solid or atoms in a mole of gas. Nevertheless, nuclei exhibit behaviors that are emergent in nature and present in other complex systems. For instance, shell structure, symmetry breaking phenomena, collective excitations, and superconductivity are found in nuclei, atomic clusters, quantum dots, small metallic grains, and trapped atom gases.

Although the interactions of nuclear physics differ from the electromagnetic interactions that dominate chemistry, materials, and biological molecules, the theoretical methods and many of the computational techniques to solve the quantum many-body problems are shared. Examples are ab-initio and configuration interaction methods, and the Density Functional Theory, used by nuclear theorists to describe light and heavy nuclei and nucleonic matter.

Today, much interest in various fields of physics is devoted to the study of small open quantum systems, whose properties are profoundly affected by environment, i.e., continuum of decay channels. Although every finite fermion system has its own characteristic features, resonance phenomena are generic; they are great interdisciplinary unifiers. In the field of nuclear physics, the growing interest in theory of open quantum systems is associated with experimental efforts in producing weakly bound/unbound nuclei close to the particle drip-lines, and studying structures and reactions with those exotic systems. In this context, the major problem for nuclear theory is a unification of structure and reaction aspects of nuclei, that is based on the open quantum system many-body formalism. Solution of this challenging problem has been advanced recently through the new-generation continuum shell model approaches, in particular the Gamow Shell Model based on the Berggren ensemble. The recent development of the Density-Matrix Renormalization Group algorithm for open quantum systems within the rigged Hilbert space formulation of quantum mechanics, enables presently fully converged configuration interaction calculations.

As FRIB Chief Scientist, Witold (Witek) Nazarewicz advises the project director on issues related to science, and articulates FRIB’s capabilities to the national and international science community, including potential users. He also ensures that FRIB research programs remain at the cutting edge of the field, address important science questions, and are widely regarded as well-founded, appropriate, and of high scientific impact.

Dr. Nazarewicz is a Fellow of the American Physical Society, the U.K. Institute of Physics, and the American Association for the Advancement of Science. He was named a 2008 Carnegie Centenary Professor by the Carnegie Trust in Scotland; received an Honorary Doctorate from University of the West of Scotland in 2009; and was awarded the 2012 Tom W. Bonner Prize in nuclear physics from the American Physical Society and 2017 G.N. Flerov Prize from the Joint Institute for Nuclear Research.

Dr. Nazarewicz authored/edited 7 books, is the author of 10 review papers and more than 400 refereed publications in scientific journals, with more than 23,000 citations and h-index of 82. He has given over 280 invited talks at major international conferences and more than 290 invited seminars and colloquia. He has helped organize over 80 meetings and conferences and presently serves on 11 professional national and international committees and editorial boards.