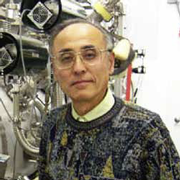 A Three-Cavity System which Suppresses the Coupled-Bunch Instability Associated with the Accelerating Mode. Y. Yamazaki and T. Kageyama, Part. Accel. 44, 107 [1994]

Yoshishige Yamazaki joined the NSCL as a Professor in November 2011, with a joint appointment in the MSU Department of Physics & Astronomy. He is the Deputy Director of the FRIB Accelerator Systems Division. His statement of research interests follows.

Particle accelerators, which were at first invented and developed mainly for studying atomic nuclei and fundamental particles, are nowadays applied to a wide variety of fields, including materials science, life science, cancer therapy, and so forth. Future possible applications may include the transmutation of nuclear waste, which arises from nuclear energy plants. In other words, the development of particle accelerator technology is required not only for studying fundamental particle physics and nuclear physics, but also for other sciences and industrial technology.

In order to build a world-class particle accelerator, we have to make use of a wide variety of state-of-art technologies. Not only that, in many cases, we have to newly invent and develop some key components, which are themselves applied to other industrial use. In other words, not only accelerators themselves, but also technologies developed for accelerators contribute a lot to the progress in science and technology.

Here, the key word is “world-class”. The linear accelerator in the Facility for Rare Isotope Beams (FRIB) is truly a world-class accelerator. Many species of heavy ions up to uranium are accelerated to 400-MeV/nucleon, generating a beam power of 400 kW (the world-highest uranium beam power). With that amount of power, many rare isotopes will be discovered and studied, opening up a new era for nuclear physics, astrophysics and others.

For that purpose, superconducting cavities are entirely used to accelerate the beams from a very front end. The FRIB accelerator, thus innovative, presents many chances for new inventions and developments.

I developed, built and commissioned the RF cavity systems of KEK-PF (Photon Factory, world-highest power synchrotron radiation source, when built) and TRISTAN (world-highest energy electron/positron ring collider, when built) and the RF system of KEKB (B Factory, world-highest luminosity electron/positron ring collider). Before joining NSCL, I have been an accelerator team leader for J-PARC, which generates a world-highest pulse power of neutrons, muons, Kaons and neutrinos. I measured the threshold currents of the coupled-bunch instabilities for the first time and cured the instability for KEK-PF, developed the on-axis coupled accelerating structure for rings for TRISTAN, invented the ARES cavity, for KEKB, invented π-mode stabilizing loops for J-PARC RFQ, and developed the annular-ring coupled structure (ACS) for J-PARC linac. As can be seen from above, I have covered both the beam instability study and the RF technology.

The technology/engineering is nothing but applied science. In other words, deep understanding of physics is really necessary for accelerator physics. On the other hand, accelerator development is a good playground to enjoy physics. I would like to invite many graduate students to enjoy physics by developing, building and commissioning the FRIB accelerator. Here are many chances of invention and innovation, and I can supervise you for those.