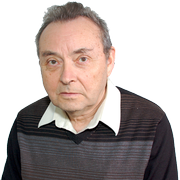 My current interest is concentrated on mesoscopic aspects of nuclear physics. The mesoscopic world is intermediate between elementary particles and macroscopic bodies. Mesoscopic systems consist of a relatively small number of particles which still show the noticeable properties of matter. On the other hand, such systems are small enough so that we can study, in theory and in experiments, individual quantum states. Nuclei provide one of the best examples of such arrangement and self-organization. Other mesoscopic systems are complex atoms, molecules (including biological ones), solid state nano-devices and future quantum computers. In all cases, we have certain symmetry, particles, their individual motion in a common field, their interactions, collective excitations (waves, vortices, rotation), coexistence of regularity, complexity and chaos, response to external forces and possible decay.

Loosely bound nuclei are of special interest just because of weak binding. In this situation quantum particles can live far away from the rest of the system in a classically forbidden region forming quantum skins, halos and clusters. Intrinsic structure of such a system is strongly coupled with continuum (or an environment in the context of condensed matter). It is a challenge to learn how one can describe in the same consistent framework intrinsic properties, resonant interaction with external fields and numerous nuclear reactions which give the only available tool to study such exotic systems. Our method of choice (collaboration with A. Volya) is the Continuum Shell Model that combines on equal footing structure and reactions. There are still many unsolved problems in this promising approach. Nuclear reactions have many common features with the signal transmission through a mesoscopic solid state device (quantum dot, quantum wire, quantum computer). Our experience in nuclear physics helps in understanding a more broad class of problems.

Another important theoretical topic is related to symmetries and phase transitions. We still do not have a reliable theory of nuclear shapes and their transformations along the nuclear chart or as a function of excitation energy. The problem is that in mesoscopic systems, frequently the shape is not sharply fixed as, for example, in perfect crystals. Many nuclei are soft and reveal large shape fluctuations. On the other hand, there are reasons to believe that soft modes can enhance some unusual phenomena, such as violation of fundamental symmetries (invariance with respect to coordinate inversion and time reversal). This is a bridge between mesoscopic physics and physics of elementary particles. 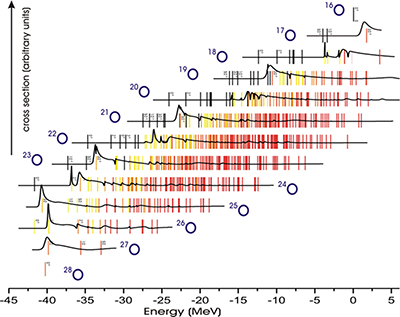 For the chain of oxygen isotopes from 16 to 28 we have calculated, in the same approach, bound states, resonances and neutron scattering cross sections. In red we show unstable states with strong color indicating shorter lifetimes.