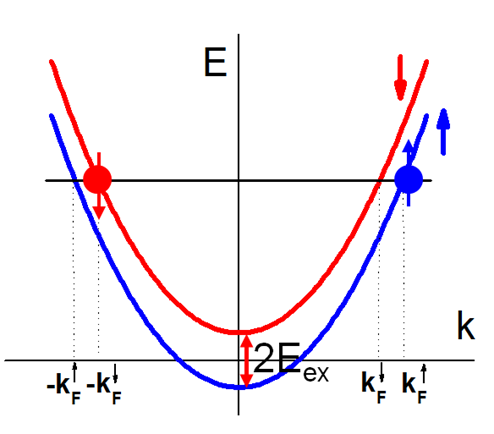 When a superconductor (S) is put in contact with a normal metal (N), the normal metal takes on some superconducting-like properties near the S/N interface. This "proximity effect" can extend several hundreds of nanometers into the N layer at very low temperatures. When a superconductor is put in contact with a ferromagnet (F), the situation is more interesting, as illustrated in the cartoon to the right. The ferromagnet F is represented by a spin-up band and a spin-down band, which are separated by the twice the exchange energy, Eex. When the two electrons from a Cooper pair enter F, they must enter different spin bands. Hence the pair acquires a finite momentum ℏQ, where Q = kF↑ - kF↓ = 2Eex/ ℏvF. Alternatively, one can say that the pair correlation function oscillates with wavevector Q. That oscillation decays algebraically in ballistic systems, or exponentially in diffusive systems. The oscillation period is 2πξF = 2π/Q = hvF/2Eex. Large values of Eex (of order one electron-Volt) in strong ferromagnets lead to very short values of the oscillation period - about 1 nm in Ni, Fe, or Co.

Today's supercomputers are large and power hungry. There is an increasing need for data centers and large computing facilities that conventional CMOS technology is not equipped to handle. Estimates suggest a superconducting computer would be orders of magnitude more energy efficient than current semiconductor-based supercomputers. In order to realize this possibility, there is a need for superconducting cryogenic memory. Our collaborators at Northrop Grumman have developed a theoretical memory cell to meet this need that utilizes phase-controllable Josephson junctions like the one we made above. They continue to work on the read/write mechanism for the memory cell as well as the superconducting logic circuits for the supercomputer. Once our switchable junctions are fully optimized, we plan to combine them with Northrop's cell to create a fully functional Random Access Memory.