Michigan State University, in partnership with CINT at Los Alamos National Lab, is hosting a major research conference—the 7th Conference on Photoinduced Phase Transitions and Cooperative Phenomena (PIPT7) this month. The conference is an international meeting bringing together leading experimentalists and theorists in the field of photoinduced phase transitions in cooperative systems. This year’s conference will focus on the control science of quantum materials. These quantum materials, often also referred to as strongly correlated electron materials are featured by their complex phase diagrams where multiple electronic phases often occur adjacently. The rich variety of ordered states—including superconductivity, electronic crystals, magnetic orders, and collective topological states—emerge as a consequence of the astounding properties of quantum mechanics. The research on quantum materials has gained momentum recently driven by the desire to harness the functionalities beyond the conventional semiconductors.

In the past several decades, the intriguing discoveries of the quantum phases strongly interacting with light fields on the ultrafast timescales defy the intuitive understanding of how electronic materials shall behave and thus gave rise to a new field of ultrafast material research, now dubbed photoinduced phase transition (PIPT). Whereas ultrafast nonthermal control of quantum materials is poised to new ways of engineering quantum phases, the mechanism to exert control is rooted in nonequilibrium quantum many-body physics. 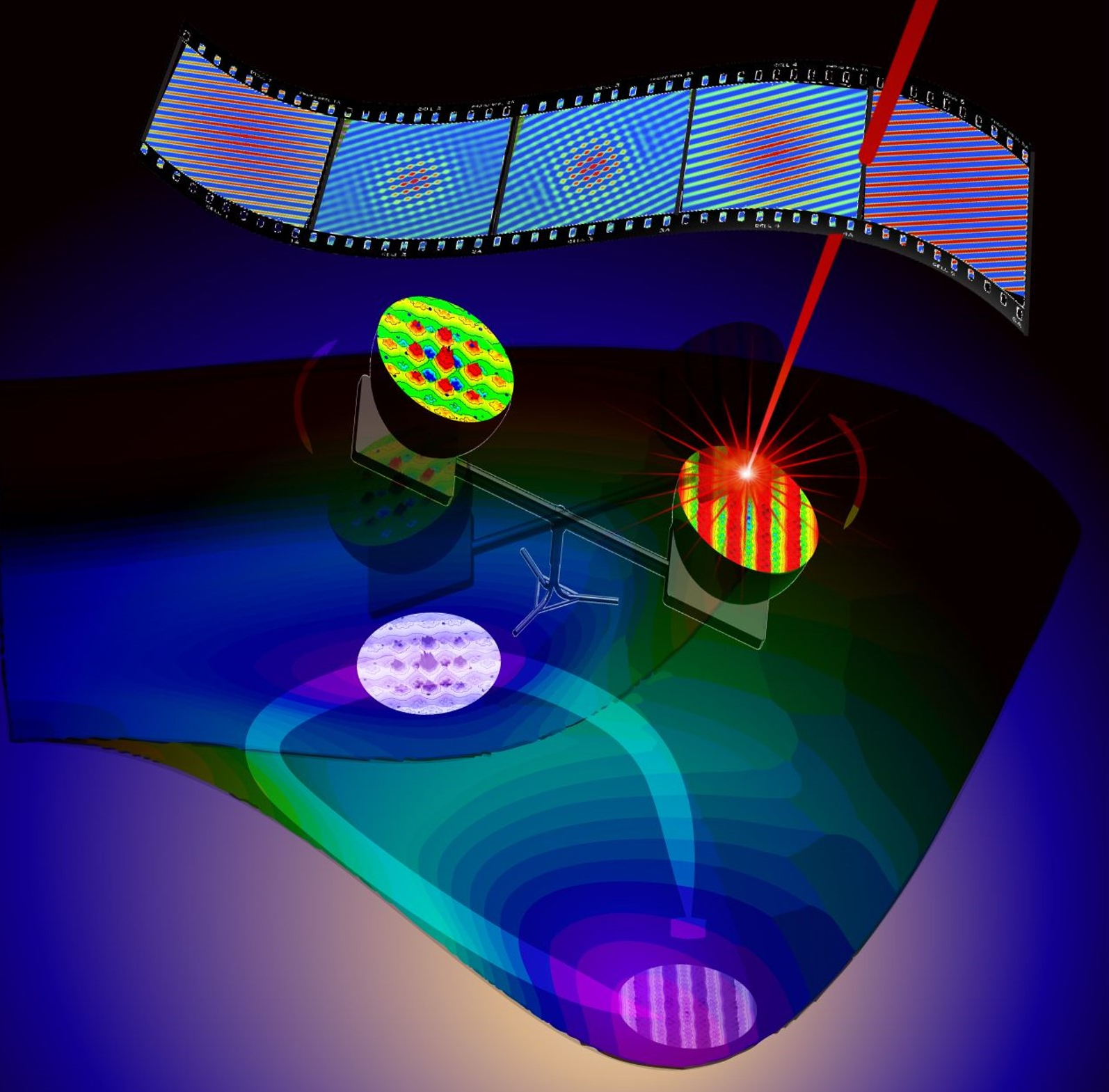 Quantum material systems upon applying ultrashort laser pulses provide a rich platform to access excited material phases and their transformations that are not entirely like their equilibrium counterparts. The addressability and potential controls of metastable or long-trapped out-of-equilibrium phases have motivated interests both for the purposes of understanding the nonequilibrium physics and advancing quantum technologies. Thus far, the dynamical spectroscopic probes eminently focus on microscopic electronic and phonon responses. For characterizing the long-range dynamics, such as order parameter fields and fluctuation effects, the ultrafast scattering probes offer direct sensitivity. Bridging the connections between the microscopic dynamics and macroscopic responses is central toward establishing the nonequilibrium physics behind the light-induced phases. We present a path toward such understanding by cross-examining the structure factors associated with different dynamical states obtained from ultrafast electrons scattering, imaging, and modeling. We give the basic theoretical framework on describing the non-equilibrium scattering problems and briefly describe how such framework relates to the out-of-equilibrium phenomena.  Rich scenarios as those involving competitive broken-symmetry orders, vestigial orders, and the intertwined ground states could be identified, leading to intriguing nonequilibrium states and hidden phases. With the increasing controlled experiments possible, we are exploring the idea of using the light-excited quantum material as a platform to study non-equilibrium many-body physics.

In partnership with colleagues at MSU (Berz, Duxbury, Zerbe) and FRIB (Lund), our research team is developing a new type of ultrafast electron energy loss spectroscopy (UEELS) technique for materials research.  It is targeted to substantially enhance the current temporal and momentum resolution and throughput of electron-based spectroscopy systems to ultimately allow studies of individual nanostructures and motifs with three-dimensional (3D) momentum resolution over the entire Brillouin zone. Such capabilities are currently not available in conventional electron-based spectroscopy systems.   The foundation of this development is to design ultrabright monochromatic electron beams through active energy compression technology with the goal of preserving the throughput of the beam for material research.  This new concept is expected to enable research with the energy resolution from 0.1 eV to 10 eV for low-loss and core-loss electron spectroscopy with fs-ps time resolution.  This research is supported by an NSF-MRI grant (2017 - ). 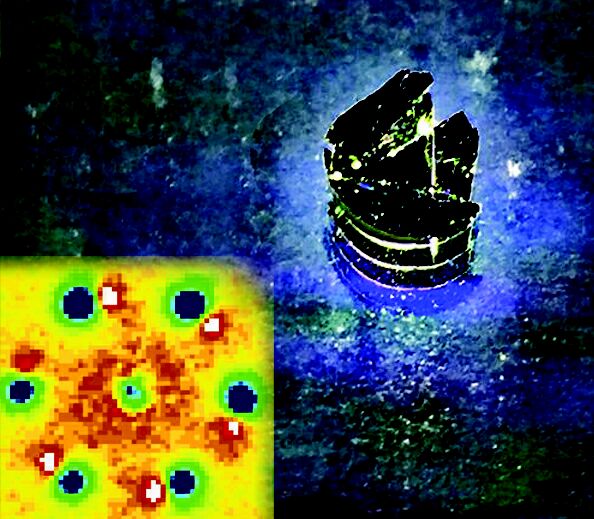 Characterizing and understanding the emergence of multiple macroscopically ordered electronic phases through subtle tuning of temperature, pressure, and chemical doping has been a long-standing central issue for complex materials research. In a recent Science Advances article, we describe a high-fidelity approach that combines femtosecond electron crystallography and controlled femtosecond photo-doping to reveal the ultrafast structural dynamics of complex quantum phases in response to the photonic tuning of interaction energy as an alternative route to chemical doping or applying pressure, but without uncontrolled effects due to strain or disorder. We report a comprehensive study of optical doping–induced emergence of stable phases and metastable hidden phases in charge-density-wave tantalum disulfide materials. The electronic phase transitions are triggered by mid-infrared pulses, and a temperature–optical density phase diagram is constructed and substantiated with the dynamics of metastable states, highlighting the cooperation and competition through which the macroscopic quantum orders emerge. These results elucidate key pathways of femtosecond electronic switching phenomena and provide an avenue to comprehensively investigate optical doping–induced transition states. Furthermore, the speed and degree of photodoping substantially exceed that achievable with conventional methods, creating opportunities to generate new phases. The robust nonthermal switching at mesoscales and at ultrafast time scales may oneday provide a platform for designing high-speed low-energy consumption nanophotonics and electronics devices.

This work is a result of collaboration between Ruan, Duxbury, and Mahanti groups at MSU, and Kanatzidis group at Northwestern University.

The resolution limit of ultrafast electron imaging and spectroscopy

The UEM collaboration (groups of Berz, Duxbury, and Ruan) zoomed in on the stochastic space-charge effects in the generation of high-brightness electron beams. Using a multilevel fast multipole method, coupled with the shadow imaging of femtosecond photoelectron pulses for validation, we quantitatively elucidate the photocathode, space charge and virtual cathode physics, which fundamentally limit the spatiotemporal and spectroscopic resolution and throughput of ultrafast electron microscope (UEM) systems[J. Appl. Phys. 111, 044316 (2012)]. A simple microscopic description to capture the nonlinear beam dynamics based on a two-fluid picture and elucidate an unexpected dominant role of image potential pinning in accelerating the emittance growth process. These calculations set theoretical limits on the performance of UEM systems and provide useful guides for photocathode design for high-brightness electron beam systems. electron imaging and spectroscopy [Appl. Phys. Lett. 103, 253115 (2013)]. Further improvement in time resolution may come through improving the source brightness, through for example; laser pulse shaping or tuning of the driving photons to threshold energy from a high-efficiency cathode; and may make ps macromolecular imaging feasible without the need to outrun the radiation damage effects, as required in the case of imaging using X-rays. Further quantitative details addresses the source-limited performance of ultrafast electron imaging and spectroscopy systems under various acceleration fields, and photo-electron pulse aspect ratios, namely the so-called pancake and cigar scenarios. The simulation results point to the interesting finding that a ps cigar beam indeed excels in coherence length ( up to 20 nm with 10^4 electrons and ~1nm with 10^8 electrons, however, the high acceleration field also increases its energy spread, whereas the energy spread of cigar-shaped beams is quite unaffected[J. Appl. Phys. 116, 174302 (2014)].Overall, the fs pancake beam has significantly smaller longitudinal emittance up to the virtual cathode limit, and is more suited for high combined temporal-spectral resolution UEDs, whereas the cigar beam may be suited for ps imaging, close to the single-shot limit. These projections show promising parameter space for conducting ultrafast electron microdiffraction at close to the single-shot level, which is supported by the latest experimental characterization of such a system [Proc. of SPIE, vol. 9198 (2014)].

Decoupling of the electronic and structural phase transitions in VO2

Shaping up graphite with light 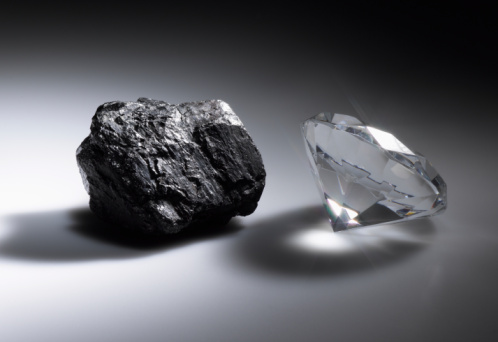 Can we make diamond from graphite without resorting to extreme heat and pressure as diamond was made in the Earth in geological time? The UEC team raise such a possibility by shining a short burst of intense femtosecond laser pulse on graphite and watching using ultrafast diffraction the movements of some loosely separated carbon atoms in graphene layers undergoing rehybridization, forming more tightly bound diamond-like bonds. Whereas this intriguing intermediate structure is short-lived, approximately for 30 picoseconds, this experiment shows the possibility of a structural transformation purely induced by light in this very versatile class of material. Assisted by density functional theory calculation performed by Tomanek's group at MSU, the cause for such a transformation is attributed to the electronic structure changes and the Coulomb field buildup following the photoexcitation.  We are currently exploring different strategies in optically converting graphite into more permanent form of diamonds on graphite surface and ultrathin slab.

We detailed a method to directly measure the photovoltage at nanointerfaces using femtosecond electron pulses.  The transient surface voltage is determined by observing Coulomb refraction changes induced by interfacial charging.  Using coherent diffraction signal, we can trace the origin of the refractive beam trajectory in material, thus obtain the nanoscale scale sensitivity of the charge transfer process.   We are currently extending this approach to investigate molecular electronic processes.

We report in the Nano Letters the studies of ultrafast electron nanocrystallography on size-selected Au nanoparticles (2-20 nm) supported on a molecular interface. Reversible surface melting, melting, and recrystallization were investigated with full-profile atomic density maps determined with sub-picosecond and picometer accuracies. In the ultrasmall environment, the melting process induced by photons is ultrafast and far-from-equilibrium, transforming nanocrystals into shelled nanoliquids.  The energy of the photons is transferred to the atoms within just a few picoseonds. However, it takes tens of picoseond for the atoms to be released from the crystalline motif into a liquid shelled structure. This dynamical transformation is strongly influenced by a coherent shearing motion within fcc structure that is determined as the pathway leading to the photomelting. The nanoliquids is more icosahedral-like, and it reverts to the fcc crystalline state in 100 ps. The structural excitation is displacive which results in a coherent transformation with crystal/liquid coexistence and that differs from the reciprocal behavior of recrystallization, where a hot lattice forms from liquid and then thermally contracts. The degree of structural change and the thermodynamics of melting are found to depend on the size of nanoparticle. The reversible and coherent transformation on the ultrafast time scale demonstrates the directed dynamics on the energy landscape of finite systems. This methodology is general and could be implemented to study a wide class of phenomena pertaining to nanoscaled materials. 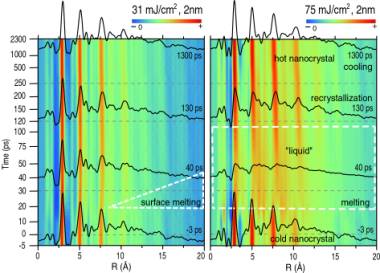